HAT YAI, Songkhla - The escalating extremism and violence in the deep South of Thailand should not be allowed to disrupt efforts to find a solution to the problem, former prime ministers Abhisit Vejjajiva and Mahathir Mohammad agreed at the International Conference on Political Science, Public Administration and Peace Studies in Asean Countries on Friday. 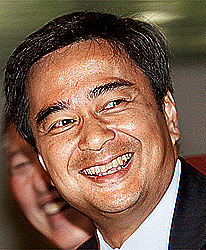 Former Thai prime minister Abhisit said a solution to the southern problem required a political solution, political will, and a political process involving all sides.

The process to usher in the required results was important and a challenge in itself since the authorities were in a positionto decide how and by whom these goals would be represented.

He said during his government's term, "I saw some progress in ability to deliver talks, and this needs to be continued".

The present government needed to continue this commitment to finding a solution, he said.

"I am willing to sit down with the prime minster and other authorities to discuss the issue either within the parliament or elsewhere," said Mr Abhisit.

Mr Abhisit said his government's progress in this area included the opening up of political space, a new law on administration, a special advisory council, and having officials engaged in talks.

"This is a trust building process and we need to identify who represents whom and we need to retain a balance in considering the protection of rights for all groups as well. We hope the current government will see the rationale and benefit of the policies," the opposition Democrat Party leader said. 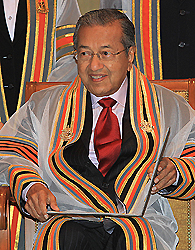 Former Malaysian premier Mahathir emphasised that the problem in southernThialand is an internal affair for the Bangkok government, but said he had been telling  some people to resolve their differences in a peaceful way.

Mr Mahathir talked at length on how Malaysia and its neighbours, such as Thailand, the Philippines, Indonesia and Brunei, have averted wars in settling their territorial conflicts in past decades and how that led to the present Association of Southeast Asian Nations (Asean).

Talking to the Bangkok Post on the sidelines of the conference about the recent bombings and raising of the Malaysian flag in the far South, Mr Mahathir conceded that some people in southern Thailand do have dual Thai-Malaysian nationality.

But this did not mean that the current approach (like flag hoisting) was welcomed by other people in their  movement, Malaysia's longest serving prime minister said.

Mr Mahathir was very cautious in his reading of the current situation in the border provinces, but he did say that he saw the opening up of space and dialogue as a positive move.

Extremism would always exist, and this would test the ability of people in the  far South to present a unified front, he said.

"But this does not mean attempts to discuss their needs and aspirations is a negative thing. We should try to find a peaceful solution," said Mr Mahathir.

Asked if he still believed autonomy was a solution to the far South, Mr Mahathir said autonomy was one solution but it did not necessarily mean independence, but rather self rule within certain areas and not foreign and defence affairs.

But, he noted, whatever it was called, this idea must be explained to the Thai society at large  so that they understood and accepted it.

In Indonesia, Aceh had a form autonomy, but there was still some infighting among elements in Aceh who wanted independence, said the Malaysian leader.

"When Thaksin Shinawatra was prime minister, I talked about autonomy but he rejected it strongly," said Mr Mahathir.

He concluded that unless the government had a strong mandate to implement a unification policy in the South,  then there would still be room for talks and dialogue.

Policy flip-flopping was part of the problem, he said.

Mr Abhisit explained the cycles of violence in THailand,  not only in the Southernbut also the national political conflict.

Mr Abhisit said the political conflict stemmed from political competition. First the ruling of the court on hidden assets, then street politics to oust the prime minister, that in turn that led to the coup d'etat which in turn led  to new conflict, distrust and abuse, and both sides of the conflict later felt they were denied justice.

With community propaganda machines, once situation gots out of hand, force was sent on to the streets and this led to more losses and further conflict.

The South may be somewhat different in that it goes far back in history and in cultural differences, said Mr Abhisit.

He suggested that outsiders may have a role to play and to facilitate or mediate the conflict, but this must be done in a sensitive and careful manner.