Army in new bid to get its airship flying
Thailand
General

Army in new bid to get its airship flying

The army has agreed to pay 50 million baht more to an American airship producer to make its 350-million-baht airship fly for the first time since its procurement.

An army source said the army signed a contract with Aria International Inc on Sept 20 to make the surveillance airship stay up in the air.

The company was originally hired to provide the airship, which has not flown since its arrival in the country. 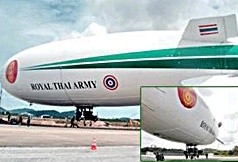 Army chief Gen Prayuth Chan-ocha ordered the contract because he does not want the airship to rest in its hangar in Pattani province any longer.

The contractor is confident it can make the airship fly by November.

The airship has been unable to fly since its delivery about two years ago. The army formally accepted the airship in July last year. Since then it has had to pay for its maintenance.

The airship was ordered during the tenure of former army chief Anupong Paochinda who hoped it would help deter threats in the three southern border provinces. However, it was criticised for being unsuitable for security missions in the far South, as it could be shot down with ease.

Poor storage caused multiple leaks, and the supplier repaired it once. The cameras of the airship and their video streaming system are also out of order.