Four soldiers and a civilian bystander were injured in bomb attacks yesterday in Narathiwat and Pattani. 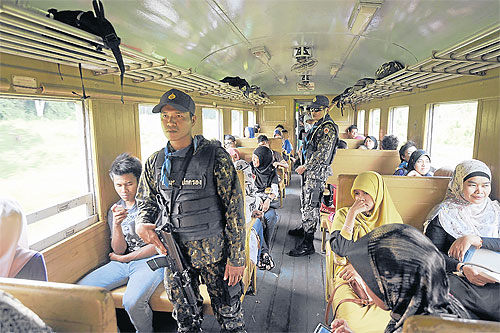 The attack in Narathiwat targeted a security force that was escorting teachers in a particularly violence-plagued area.

The explosion went off about 7.30am on a road in Ban Deu Yae while an 11-member security team was on a routine patrol to protect teachers commuting between their houses and the schools.

Private Anan Maijui, Pvt Suwatchai Karnthang, and Tuwai Yako, 53, sustained shrapnel wounds from the blast. They were taken to a nearby hospital, where doctors said their injuries were minor.

The explosion injured Pvt Anant Dolarman and Pvt Theerasak Kaewkhao, both of them 23. The two were attached to the Pattani Special Task Force 24.

Meanwhile, train services between Yala and Narathiwat's Sungai Kolok district resumed yesterday after being suspended for three days following a bomb attack on Sunday that killed three people and injured 35 others.

Authorities implemented stringent security measures in the wake of the attack. Security forces have been deployed to ensure safety on board trains, at the stations and along the railway.

The southern railway has been hit by about 100 insurgent attacks during the past eight years, costing the State Railway of Thailand more than 100 million baht.

The section of the southern railway from Yala's Raman district to Narathiwat's Sungai Kolok district has attracted the most frequent attacks, he said.

The number of passengers travelling by train via this particular route appeared considerably lower than usual yesterday.

Somsak Thepsena, a teacher working in Narathiwat's Tak Bai district, said he feared for his safety on the train but continued to use it to get to work because it was the cheapest option.