PATTANI -- The army's plan for an eye-in-the-sky in the far South was brought down to earth yesterday. 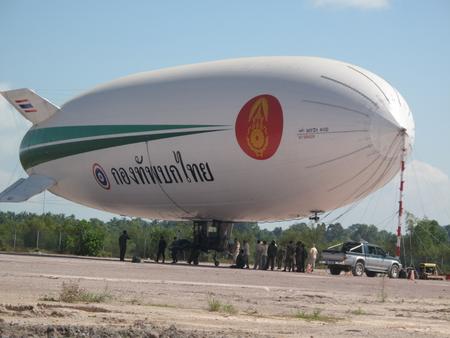 Thai soldiers and technicians fro the US supplier set up the surveillance airship at a military barracks in Pattani in March 2010. (Photo by Abdulloh Benyakaja)

The scandal-plagued airship was to be used to patrol the skies during Prime Minister Yingluck Shinawatra's visit to the region.

It crash-landed at the 15th Infantry Division in Nong Chik district of Pattani. Damage is being assessed. The two military pilots and two technicians who were on board when the airship crashed escaped with minor injuries.

The Thai army purchased this surveillance airship in 2010 as part of a strategy to restore peace in the three troubled Muslim dominated provinces in the far South, but it has yet to complete a flight amid widespread criticism it is yet another  waste of state funds.