Additional security to be given to teachers

Six army and volunteer rangers were wounded in an explosion and ensuing gunfight while on patrol in Narathiwat's Cho Airong district yesterday morning. 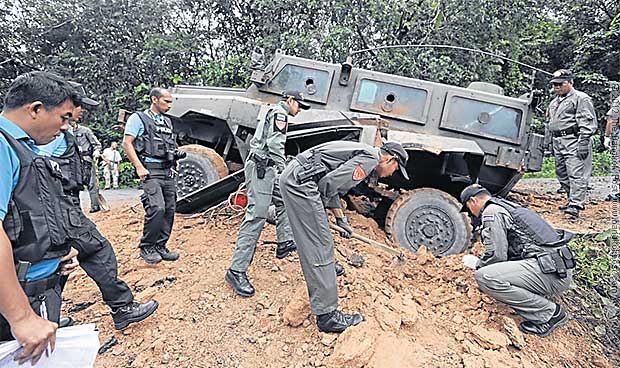 Officers examine a blast site on a road between Ban Aipayae and Ban Cho Airong in Narathiwat’s Cho Airong district yesterday. The bomb wounded six army and volunteer rangers who were on patrol in their armoured vehicle. WAEDAO HARAI

The bomb was detonated while the rangers were travelling in an armoured vehicle along a road between Ban Aipayae and Ban Cho Airong.

Sgt Abdulrahim told investigators that the armoured vehicle's rear wheels became stuck in the blast crater after the bomb went off. He ordered his men to exit the vehicle and take cover.

The rangers then engaged in a 15-minute gun battle with suspected militants who were hiding in roadside bushes. The assailants fled after back-up was called.

All six rangers were taken to Cho Airong Hospital in central Narathiwat province for treatment.

Investigators said the bomb was placed inside a 50kg gas cylinder. A 150m-long wire was found linking the bomb to nearby bushes.

Meanwhile, Education Minister Phongthep Thepkanchana yesterday promised that security measures for teachers will be extended to cover their homes, travel routes and schools.

Teachers will need to inform authorities in advance if they are leaving their protection zones, Mr Phongthep said, adding that security units will be deployed to schools on a case-by-base basis.

The education minister's assurance came in the wake of an increase in attacks on teachers in the far South.

Three teachers have been killed and one critically injured in the insurgency-plagued region over the past two weeks.

Classes were suspended at 1,200 schools in the far South yesterday and Thursday after the murder of two teachers on Tuesday. The minister said classes were expected to resume classes on Monday.

Meanwhile, 62 teachers have requested to be transferred out of their schools in Narathiwat's Muang, Yi-ngo, Bacho, Rueso and Si Sakhon districts, Chanwit Rangsao, an officer of the Narathiwat Primary Educational Service Area Office 1, said. More transfer requests are expected.

Ratinporn Kwannongrak, a Yala teacher who requested a transfer, called on the government to restore teacher confidence. He said teachers feel insecure every time they go to work or step outdoors.

He said Mr Chalerm was "heartless" and was not qualified to deal with the issue.

He added that the new command's work would overlap with that of the Southern Border Provinces Administrative Centre.

Mr Abhisit urged Prime Minister Yingluck Shinawatra to take responsibility for the situation herself instead of assigning Mr Chalerm.