A search and kill hunt for Buddhist officials in Narathiwat province on Thursday has sparked fears that insurgents are shifting their target from teachers to government officials.

Seven armed men stormed into the Bacho Tambon Administration Organisation (TAO) office around noon on Thursday and burned it down after failing to find any Buddhist employees to kill.

Abdulwaha Dulayapinij, the office chief, told the police he and seven other employees were just leaving for lunch.

"One of them fired a gun into the air and ordered everyone to stay put in Yawi [a Malay dialect spoken by Muslims in the South] and then asked if there were any Buddhist Thais working here," Mr Abdulwaha said.

"I told him there were none, and the outlaw was upset and said I had lied to him," he added. 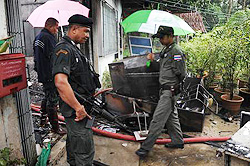 Policemen inspect the premises of the Bocho Tambon Administration Organisation office which was set on fire by suspected separatist militants. (AFP photo)

Mr Abdulwaha then explained there was a female Buddhist official identified as Suchada sae Li working at the TAO as a community development officer, but she was on leave on Thursday.

Upset with the answer, two of the gunmen emptied a five-litre container of gasoline into the archive and equipment storage rooms, set fire to it and then fled the scene.

Staff, villagers and a local disaster relief team tried to put out the fire, but the blaze spread quickly and destroyed the whole building.

Mr Abdulwaha said it appeared the assailants wanted to kill the only Buddhist official at the office, and had planned to use the gasoline to burn her body.

He said the attack left him and the other staff in fear for their own safety and it was likely they would not return to work until the office was rebuilt.

The latest incident took place three days after a vehicle transporting government officials was ambushed by insurgents in Cho Airong district in the same province.

On Monday, two officials from the Agricultural Extension Office in Sungai Padi district were killed in the attack. Five others, including a female teacher, were injured.

Security sources in the far South said that the two cases showed insurgents now were looking for government officials after targeting teachers over the past few weeks.

They always changed their target as part of their strategy, they added.

Panu Uthairat, deputy permanent secretary for interior in charge of the southernmost provinces, said security authorities are stepping up measures to protect not only teachers but officials working in the southernmost border provinces.

They will secure roads to their offices to ensure their safety and extra measures will be used in areas deemed extremely dangerous, the officials added.

Teachers in the southern border provinces continue to be worried about their safety but decided to reopen schools last Monday after Prime Minister Yingluck Shinawatra guaranteed them better protection measures and welfare.

Mr Panu said the Education Ministry has set up Hotline 1890 to help teachers in the region and also encouraged them to stay at official residences provided for them in school compounds with protection from security authorities.

Keeping them in school premises would reduce their chances of being targeted by insurgents, he added.

Meanwhile, a police sergeant at a security checkpoint in Yala province was killed by a sniper on Thursday morning, believed to be the first attack of its kind by insurgents in the far South.

Pol Sgt Wachira Sangsri, 32, was shot in the neck while on his motorcycle near a security checkpoint in Krong Pinang district. He died on the way to hospital.

A joint civilian-police-military force official said Pol Sgt Wachira was probably killed by a sniper with a rifle fitted with a telescopic sight. The shooter was likely concealed in one of the nearby buildings and had deliberately targeted a member of the security forces.

Pol Maj Gen Peera Boonliang, commander of the Yala provincial police, said it was difficult for security officials to shoot back in such an attack because the gunman was immersed in a communal area.

The attack was being blamed on a group headed by Ustaso, or Ismaae, Rayalong, an insurgent leader wanted on multiple warrants. He is known to be active in the area and orchestrated the youth uprising against state authorities in 2004 at the start of the insurgency.

About 5,000 people have been killed, 157 of them teachers, since insurgents renewed violence in the region in 2004.

Girls were excluded from returning to secondary school in Afghanistan on Saturday, after the country’s new Taliban rulers ordered only boys and male teachers back to the classroom.