More than 700 teachers in the far South took an oath not to abandon their students in the region in an activity to mark Teacher's Day in Narathiwat Wednesday. 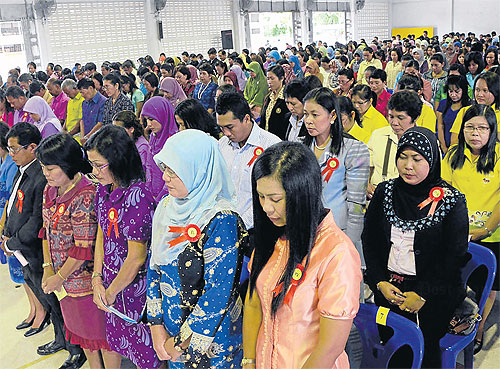 The event was held at Narasikkhalai School in Muang district, where Narathiwat deputy governor Sittichai Sakda presided over the ceremony and presented awards to teachers with excellent performances last year.

They also vowed to work in the area until the end of their careers to pay tribute to the dedication of the 157 teachers who have lost their lives since the unrest in the deep South flared up again in January 2004.

A minute's silence for the fallen teachers was also held.

The events include remembering teachers killed in the unrest and the presentation of awards for teachers with outstanding performances.

Boonsom Srithongprai, the chairman of the Confederation of Teachers of the Southern Border Provinces, called on the government to follow through on requests for help submitted to Prime Minister Yingluck Shinawatra and Education Minister Phongthep Thepkanchana. "The increase in the monthly risk allowance by 1,000 baht, which was promised by the government, has not yet come into effect," Mr Boonsom said.

"Teachers have no idea why it has been delayed."

The compensation payments for insurgency-affected teachers have yet to materialise either, he added.

Mr Boonsom, however, said teachers' morale remains strong, saying less than 100 teachers had asked to leave the three southernmost provinces. Most of the transfer requests had been made for positions at schools in the southern region.

He added that a memorial day for deep South teachers will be organised late this month or early next month and the prime minister will be invited to take part.

Meanwhile, Ms Yingluck yesterday promised to support teachers with improved benefits and welfare so they could live more comfortably.

The prime minister was speaking at a Teacher's Day activity organised by the Education Ministry.

"I want to thank all teachers, particularly those in the deep South, who sacrifice themselves for the country," Ms Yingluck said.

"If teachers are not present, there is no way the quality of students can improve," she said.