UDON THANI - After nine years of hunting, police on Thursday finally arrested a female purse snatcher who is believed to have stolen from more than 100 victims.

Pol Col Kowit Chareonwattanasak, chief of the Muang district police station, said Miss Amorn had been wanted on an arrest warrant on charges of theft since 2004, but police could not find her because she continually moved around.

The 31-year-old suspect had snatched at least 100 bags, and probably more because victims of such crimes often did not report their loss to police, he said. 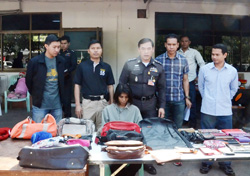 "Miss Amorn never returned home and never stayed in the same place after stealing a purse from a victim," he added.

Her last foray was on Dec 8 at Rojana textile shop, which finally gave investigators some clues about where to look for her.

Much of the stolen money was used to buy crystal methamphetamine, or ya ice, she added.

"I did it only in Udon Thani city. Police could not arrest me because I always stayed with friends or in a rented house. Everytime I went out, I always wore a crash helmet. I was called by police to pull over on my motorcycle many times. I didn't carry a driver's licence and I always paid the fine immediately," Miss Amorn said.

"Had I not been using drugs at the house, I would not have been arrested," she added.