Convicted killer Somchai Khunploem, alias Kamnan Poh, yesterday began serving the prison term for corruption from which he had been on the run for the past seven years. 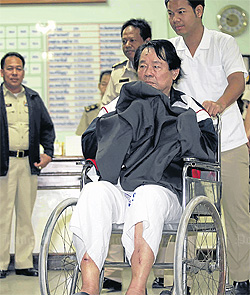 Somchai Khunploem, also known as Kamnan Poh, is wheeled into the Criminal Court, where he admitted to being the defendant in the 1992 Khao Mai Kaew corruption case. SURAPOL PROMSAKA NA SAKOLNAKORN

The Criminal Court, acting on behalf of the Chon Buri provincial court, yesterday ordered the term to begin after Somchai admitted he was the defendant in the corruption case relating to the 1992 sale of forest land in tambon Khao Mai Kaew in Chon Buri. The reserve land was sold to Pattaya City municipality to be used as a rubbish dump.

Somchai, the former mayor of Saen Suk municipality in Chon Buri, was sentenced in absentia by the Supreme Court in May 2006 to five years and four months' imprisonment in the corruption case. He had disappeared the previous month.

He was also sentenced in March last year to 25 years in jail for masterminding the 2003 contract killing of his political rival Prayoon Sitthichok. He has not yet admitted he is the defendant in that case and so has not yet begun serving the term, but it is expected that he will go through the same formality.

Somchai, 75, was apprehended on Wednesday when police stopped his car at the Lat Krabang tollgate. He was sent to Bangkok Remand Prison.

He was caught after a visit to Samitivej Srinakarin Hospital in Bangkok and was rushed to the Medical Correctional Institute when his health deteriorated.

Somchai, looking frail, was driven to the Criminal Court from the Medical Correctional Institute yesterday and taken into a courtroom in a wheelchair. He was escorted back to the medical institute by about 10 armed prison officials.

Corrections Department inspector-general Kittipat Dechapahul said Somchai is not eligible to seek suspension of his jail term even though the law allows inmates aged over 70 to do so.

An inmate can only ask for a suspension after serving at least one-third of a sentence, and the remainder of the term must not exceed five years.

Kobkiat Kasiwiwat, deputy chief of the Corrections Department, said yesterday relatives can request Somchai be transferred to Chon Buri Central Prison, although Mr Kittipat said this would be subject to a medical assessment.

"If he is very ill, the doctor may recommend that he is committed to the Medical Correctional Institute," he said.

"Chon Buri Central Prison has no medical staff and sending him to hospital [outside the facility] may be a burden."

He said police are also investigating if anyone would be charged with providing shelter for Somchai or aiding his escape.