Military leaders in the South attend a bathing ceremony of ranger Thanongsak Leucha, one of the two killed by bomb attacks in Yala on Saturday

Former prime minister Thaksin Shinawatra has weighed into the move to end the southern violence, saying the Barisan Revolusi Nasional (BRN) remained influential in the restive region, but his comments have failed to convince the army chief. Thaksin, who engineered the deal signed between the National Security Council (NSC) and the BRN in Kuala Lumpur on Thursday, told the mass circulation Thai Rath in its Sunday edition that only militant groups based in Malaysia and Indonesia were behind the trouble in the southernmost provinces.

Factions based in the two countries controlled 90% of militant operations in the deep South, he said from an unknown location. The operations of other groups in other countries were only symbolic, he added, when asked about the role of the BRN.

The agreement was received with scepticism by army chief Prayuth Chan-ocha on Sunday after violence continued in the southern provinces, including bomb attacks in Narathiwat on Friday and Yala on Saturday, killing two military rangers and injuring 17, including civilians and rangers. 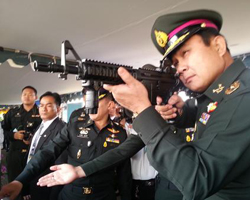 Gen Prayuth said there were other factions operating in the restive region and the group which signed the agreement with the NSC on Thursday was an old guard outfit trying to re-establish its role in the far South and its influence with other insurgents.

The army chief said young militants should be the target of talks and questioned whether they were listening to the BRN faction represented by Mr Hassan.

He was sceptical that the violence would end soon after the government enters dialogues with separatists, saying that the signed agreement was only one of several means to put an end to the problem.

But he called for patience to see how the situation in the troubled region developed after the government's decision to hold talks with the insurgents.

Opposition leader Abhisit Vejjajiva on Sunday reiterated his position that the authority of Mr Hassan over other militant factions remained to be seen and he was unconvinced that the deal will lead to the end of the violence.

Bombs in the wake of the agreement underscored continued violence in the region and government efforts to restore peace in the region with separatists needed confidence-building measures and mutual trust from both sides, he added.

The southern border region was rocked by a new insurgency in 2004 when Thaksin was prime minister. More than 5,000 have been killed and 9,000 injured, including security authorities, civilians and militants.

Mr Chalerm said on Sunday his first trip to the restive region will be arranged in one week but did not specific the day he would travel to the South.

Meanwhile, a leading member of an RKK separatist group was killed in a clash with a government force late on Saturday night in Narathiwat's Rangae district. 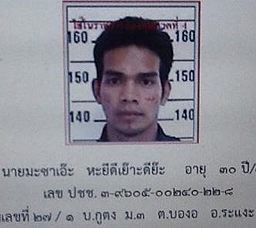 The clash occurred at about 11.30pm after three teams of the 48th Rangers Regiment laid siege to a house at Ban Kutong in tambon Bongo where three RKK insurgents led by Masa-e Hajidiyoliya, 30, were reported to be hiding. An exchange of gunfire went on for about 10 minutes.

Another exchange of fire erupted when the rangers were reinforced by a police special operations team.

The three insurgents tried to break through the siege. Masa-e was shot dead about 20 metres from the house while the two others managed to escape into the dark.

The authorities recovered an ID card of Hasman Samamaeng, 36, at the scene.

The body of Masa-e was riddled with bullets. An 11mm pistol with 50 rounds of ammunition was found by his side.

The government force seized four motorcycles from the house.