Army chief Prayuth Chan-ocha has proposed the construction of a fence along the entire Thai-Malaysian border to deter southern insurgents from moving freely across the frontier.

Gen Prayuth said Monday he had raised the proposal at a meeting with Prime Minister Yingluck Shinawatra on Sunday.

"I proposed that building a border fence could be possible as we have no territorial disputes there, and the premier agreed with the idea," Gen Prayuth said.

The army chief said a fence would hinder insurgent movements across the border. He suggested surveillance cameras be installed and that border guards patrol along the fence to reinforce security along the frontier.

"With such a border defence, we can help prevent the smuggling of bomb-making materials, among other things.

"However, we would need cooperation from the neighbouring country," Gen Prayuth said, referring to Malaysia.

He said it was difficult to monitor the border, which stretches more than 640 kilometres.

The army has to rely on the help of village heads and kamnan in this task, he said.

Gen Prayuth also expressed concern over whether suspected bombers in the deep South who were arrested and then released on bail would go on to commit fresh acts of violence.

"We are monitoring their movements," Gen Prayuth said.

"We are listing the number of suspected bombers who have been bailed and are trying to learn where they are now."

Asked if there was a link between the bomb blast in the Ramkhamhaeng area of Bangkok on Sunday and the southern violence, Gen Prayuth said authorities have long been concerned an incident like this could happen, but the exact cause is still being investigated by police.

Meanwhile, a Defence Ministry source said security officials have travelled to Indonesia to seek Jakarta's cooperation in arresting Thai insurgents who may be hiding or receiving terror training there.

Members of the government negotiation team that have held talks with the Barisan Revolusi Nasional (BRN) separatist group in Malaysia are accompanying them.

Democrat leader Abhisit Vejjajiva said Monday the BRN showed it is not being sincere by repeating at the weekend the five demands it made in a YouTube video posted on April 29.

The BRN clearly wants the involvement of Asean and the Organisation of Islamic Cooperation at the talks, he said.

The blast occurred as the rangers were taking a break in a makeshift shelter after escorting teachers to the school.

Another explosion at a bridge on the Narathiwat-Pattani road in tambon Manang Dalum of Sai Buri district killed a border patrol policeman and wounded four others.

The bomb exploded as the police officers were passing by in a pickup truck.

In Pattani's Mayo district, assistant teacher Mamad Duerao, 40, was shot dead in a drive-by shooting on Sunday night outside his home in tambon Kohchan. 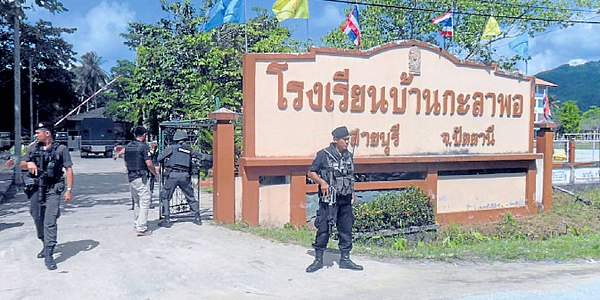 Security officers stand guard in front of Ban Kalapo School in Pattani's Sai Buri district Monday after a bomb blast at a makeshift shelter next to the school's wall killed two rangers and wounded three other people, including one civilian. The rangers were taking a rest at the shelter after escorting teachers to the school. (Photo by Abdulloh Benyakat)