NSC blames rebels in insurgency, as killing continues in South Two paramilitary rangers were killed in an ambush on the Pattani-Yala road on Tuesday. (Bangkok Post photo)

A rubber tapper was killed in an ambush at a plantation about 6.50am, Pol Lt Marut Nilkosi, duty officer at Rueso police station in Narathiwat, said.

Police sent to the scene found the body of Asman Sama, 60, lying under a rubber tree. He was shot in the chest and right leg.

Witnesses told police Asman was tapping rubber when a gunman shot him three times with a handgun. Asman died on the spot.

In Pattani, Pol Col Pitak Uthaitham, chief of Mae Lan police station, said two paramilitary rangers were killed in an ambush on the Pattani-Yala road about 4.30am.

According to witnesses, six rangers on three motorcycles were patrolling the road when gunmen hiding in the roadside forest opened fire on them with assault rifles. The rangers fired back and the attackers retreated after a brief gunfight.

Pvt 1st class Ronawit Saising, 31, and ranger Kriangsak Thoopputtha, 31, were shot several times during the attack and died on the spot.

NSC secretary-general Paradorn Pattanatabut said on Tuesday that a lot of the continuing violence in the far South is the work of insurgent groups opposed to the peace talks between the Barisan Revolusi Nasional (BRN) and other separatist groups and Thai government representatives. 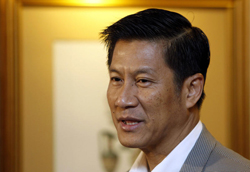 Lt-Gen Paradorn was responding to reporters' questions about the unabated violence in the three southernmost border provinces.

The NSC chief agreed the violence was partly connected to the next round of peace talks scheduled for June13 in Malaysia.

There were many groups of militants operating in the three border provinces and some of them did not want the talks to continue because they feared the groups causing the unrest would be exposed, he said.

"What is happening shows that many groups of insurgents still prefer violent means. This matter will be raised for discussion on June 13," Lt-Gen Paradorn said.

He said that during informal discussions the BRN had admitted it was still unable to convince some of its factions to reduce the level of violence.

Some new factions in the BRN still adhered to a radical line and believed only violence would lead to victory over the Thai government, Lt-Gen Paradorn said.

When it was pointed out that  there was recent violence in Pattani's Mae Lan district, where the emergency decree has already been replaced by the less severe Internal Security Act (ISA), the NSC chief said he had been convinced by the Region 4 Internal Security Operations Command that the situation in the district was still under control and it was not necessary to reintroduce the emergency law there.

He said the NSC was still firmly set on replacing the emergency decree with the ISA in more areas.

This matter was expected to be raised for discussion during the first week of June, as the current extension of the emergency decree in troubled areas will expire on June 19.

"Originally we had a plan to lift the emergency decree in every province. However, since the situation has turned more violent, we will have to reassess the plan," Lt-Gen Paradorn said.