Recent attacks in the deep South are the work of an insurgent group opposed to peace talks between the government and the Barisan Revolusi Nasional (BRN), newly appointed Deputy Defence Minister Yuthasak Sasiprapa said yesterday. 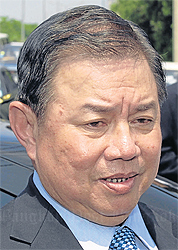 Gen Yuthasak said insurgent groups operating in the South had generally taken one of three stances on the peace talks, which began in March.

The first group has entered the talks, the second has adopted a wait-and-see position, while the third opposes the talks and has sent its members to carry out attacks, he said.

Gen Yuthasak admitted the southern unrest has grown increasingly violent, but said the military has done its best to tackle the problem.

He said peace talks with insurgent representatives should be carried out openly, though some discussions should also take place behind closed doors.

The BRN issued seven demands to the government last Tuesday in exchange for curbing violence during the Muslim fasting month of Ramadan, which starts next week.

One of the conditions was for troops to be withdrawn from Yala, Pattani and Narathiwat, as well as five districts of Songkhla.

The NSC was expected to come up with a clear answer to the demands after the Muslim fasting period ends next month.

However, authorities have said they could not accept the BRN's demand for the withdrawal of troops from the strife-torn region, Col Charoon said.

The NSC was willing to hold peace talks with other insurgent groups, he said.

Authorities were currently holding secret talks with insurgent representatives and those talks have been held without a dialogue facilitator such as Malaysia, he added.

The school is located close to the bomb site. The taskforce also set up its outpost near the school.

Lt Col Narongchai said all soldiers would perform their duty to protect the lives of the public.

Meanwhile, two people were shot dead in attacks in Pattani and Narathiwat yesterday.

In Pattani, Sama-ae Arli, 24, was ambushed by assailants while riding a motorcycle to his house in Nong Chik district about 9am.

Several bullet casings believed to have been fired by AK and M16 rifles, as well as spent 11mm shells, were found at the scene of the shooting.

In Narathiwat, Arli Salae, 21, was shot dead in his bedroom in Cho Airong district in what was believed to be an attack by insurgents.

Meanwhile, two school students who were seriously wounded in a gun attack on Sunday are in stable condition and expected to recover.