Army chief Prayuth Chan-ocha has rejected the inclusion of Sadao district in the far South Ramadan ceasefire agreement announced by the Malaysian facilitator. 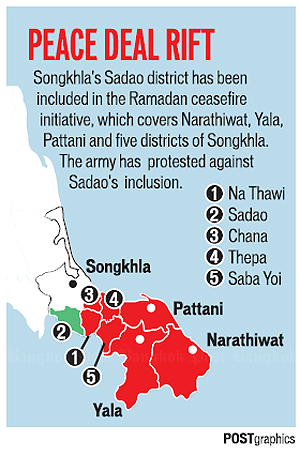 Sadao district, as a violence-free area, is not part of the talks between Thai authorities and the Barisan Revolusi Nasional (BRN) insurgent group, Gen Prayuth said Monday.

"We have not included Sadao district in the agreement," he said.

"If the BRN claims this is so, it is their decision, not ours. The government is likely to counter the BRN's claim."

The Internal Security Operations Command (Isoc) will inform the government the district is not included in the ceasefire, he added.

On Friday, Malaysia, as the facilitator of the peace talks between Thai authorities, led by the National Security Council (NSC) and the BRN, released a statement in Kuala Lumpur to announce the 40-day ceasefire covering the Ramadan fasting festival.

Thai authorities have never classed Sadao as a restive area and the district is excluded from the Internal Security Act which has been enforced in the other four districts.

NSC adviser Charoon Ampha said it was a sensitive issue as the district is violence-free and used as an entry route for security forces.

The district is also an economic zone in Songkhla. he said.

Thawee Piyapatana, chairman of the provincial chapter of the Federation of Thai Industries, said Sadao, which borders Malaysia, has emerged as a bustling business centre, as unabated bombings in the three southernmost provinces and security worries in Hat Yai have prompted investors to shift into the area.

Hotel and entertainment businesses there have boomed over the past three years, with combined investment capital exceeding 10 billion baht.

Ms Yingluck, who is also defence minister, said that demonstrating a desire to end violence was a positive step and she hoped Muslims would feel at ease during the fasting month.

On the attack in Rueso district of Narathiwat which occurred shortly after the BRN agreed to the ceasefire, Ms Yingluck said authorities were investigating whether the attack was linked to the insurgency.

The NSC will meet after Aug 18, when the agreement concludes, to assess the situation in the South and may propose the lifting of the emergency decree imposed in Narathiwat, Pattani and Yala provinces.

NSC secretary-general Paradorn Pattanatabut said that since Malaysia announced Thailand and the BRN had agreed to reduce the violence during Ramadan until Aug 18, nobody had been killed in insurgency-related attacks. During the same period last year, the average number of such deaths was two a day.

He said it was unclear whether an attack by a gunman who wounded two people in Narathiwat's Sungai Kolok district on Sunday night was the work of militants or a personal conflict.

The Organisation of Islamic Cooperation, in a statement posted on its website, praised the peace talks, Lt Gen Paradorn said. Neighbouring countries have also said Thailand is now on the right track to solving the long-standing problem, he said.

Deputy Prime Minister Pracha Promnok said on Monday that the only violence since the beginning of Ramadan on July 10 was a bomb blast near a railway track in Yala's Raman district on July 11 which injured eight soldiers.

While there were a number of violent incidents, these were likely to be personal conflicts, he said.

A villager was shot and wounded in a drive-by attack in Yala Monday.

Torleb Sapae-ing, 44, was attacked in Bannang Sata district about 1.50pm while travelling home on his motorcycle.

On Sunday night, two men were wounded in a gun attack in Sungai Kolok district of Narathiwat.

Police believed the attack stemmed from a personal conflict rather than southern unrest.

Banpote Poolpian, deputy spokesman of the southern outpost of the Isoc, said the command has recently worked out a peace plan to provide maximum security against attacks.

Laws would be strictly enforced to limit the freedom of insurgents in carrying out attacks, particularly on unarmed targets and important government offices, he said.