Two teachers were killed and three other people, including another teacher and two policemen, were injured when a bomb exploded in Narathiwat's Chanae district Wednesday. 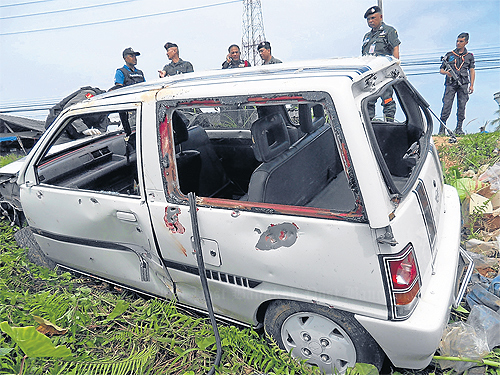 A car that carried teachers lies in a ditch after careering off a road following a bomb explosion outside Chanae Hospital in Narathiwat's Chanae district. The attack killed two teachers and wounded another teacher and two policemen. (Photo by Waedao Harai)

A seven-member police patrol _ four officers on two motorcycles and three in a patrol car _ was escorting another car carrying three teachers to Pithak Withaya Kumung School in nearby tambon Chang Phuak.

The police were providing security for the teachers.

A bomb planted by the roadside was detonated remotely as the convoy passed Chanae Hospital.

The car with the teachers inside skidded off the road into a ditch about 100 metres from where the bomb exploded.

Two female teachers _ Nayiha Yira, 38, and Nuryahan Awae, 44 _ were killed and a male teacher, Apichat Benjulamat, 33, who was the driver, was seriously injured.

The explosion directly hit and damaged the patrol car and wounded two policemen inside.

The bomb blast left a crater about 60cm deep and 1.3m in diameter.

Police said Mr Apichart, the injured teacher, stepped on the accelerator after seeing the explosion and lost control of the car, which plunged into the ditch, killing his two passengers.

A source said the two injured policemen were out of danger, while Mr Apichart was still in critical condition.

Meanwhile, army chief Prayuth Chan-ocha blamed southern insurgents for using violence as a bargaining tool to force the government to comply with their demands.

Gen Prayuth Wednesday said the southern unrest remains unsolved because insurgents want to use violence as a tool to bargain with the government to accept their demands.

However, authorities could not respond to all their demands, he said.

If violence persists in the far South, military and police forces would continue to be deployed in the region, said the army chief, who went to Yala to outline his policy to security officers there.

He said Prime Minister Yingluck Shinawatra would today hold a meeting with security agencies to follow up on the work in progress to end the southern unrest.

A source said a coordinating centre to promote peace during the month of Ramadan recently claimed that security-related cases had declined during the past 14 days from July 10 to Tuesday, with only 16 cases reported during that period, four of which were major cases of violence.

There were 28 security cases reported during the same period last year, according to the centre.

It attributed the reduction in violence to the peace talks between Thai authorities and insurgent representatives.

Last week, Malaysia, as the facilitator of the peace talks, announced a 40-day ceasefire agreement between the Thai government and the Barisan Revolusi Nasional separatist group.

The ceasefire will remain in place for the fasting month of Ramadan, which ends on Aug 18.