About 2,500 amnesty bill protesters stopped at a police barrier midway through their march to parliament on Wednesday afternoon and Democrat Party leaders told them to disperse, with the controversial legislation expected to sail through its first reading with at least 299 votes later tonight.

Democrat leader Abhisit Vejjajiva and Surat Thani MP Suthep Thaugsuban thanked the party's supporters and asked them return home after police refused to allow them to march beyond Ratchawithi intersection to accompany their MPs to parliament.

Mr Suthep said the opposition party still had a long battle to fight and promised to continue to be on the side of the people.

Democrat MPs proceeded to parliament to attend the House meeting to debate the amnesty bill that has sparked protests, which started at 1pm.

At the barricade, some protesters hurled abuse and threw water bottles at Pol Lt Gen Khamronwit Thoopkrachang, the metropolitan police chief, who was trying to negotiate with Democrat members who led the march.

The protesters were stopped by police at the Ratchawithi intersection as they attempted to make their way to parliament. 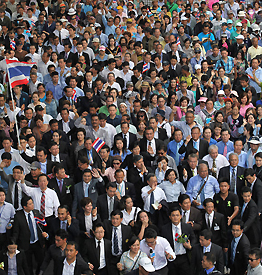 Democrat Party members led their supporters in a march to parliament in protest against the amnesty bill. (Photo by Thiti Wannamontha)

Vorapong Chiewpreecha, a deputy police chief, estimated the number of Democrat supporters who took part in the protest walk at 2,500.

Photographs indicated there were a lot more than that.

Pefot core member Taikorn Polsuwan said they were waiting for more supporters from the provinces to join them.

Mr Taikorn said Pefot had only 300 people gathered at Lumpini Park at lunchtime, not enough to put any pressure on the government.

"We will not move our people anywhere today, but wait for more to come from the provinces. They are now on the way, but have not yet arrived.

"(Police) checkpoints have been set up for searches at many spots," he said at a press conference.

"We care the most about the safety of our people. Our rally must not lead to a riot," Mr Taikorn added.

Inside parliament, chief whip Amnuay Klangpha said the amnesty bill proposed by Pheu Thai MP for Samut Prakan Worachai Hema should be passed in its first reading with at least 299 votes by 11pm tonight.

Mr Amnuay said whips had been coordinating with coalition parties to make sure all government MPs attend the House meeting to consider the bill. 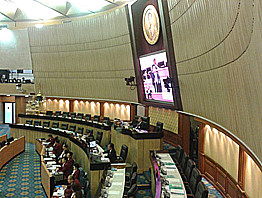 A House meeting is held on Wednesday to discuss the amnesty bill. (Photo by Chanat Katanyu)

Although the Democrat Party objects to the bill being put on the agenda, Mr Amnuay said he believed the main opposition party would allow its MPs to attend the House meeting, as it has done in the past.

"I am confident there will no violent incidents and no siege of parliament and the debate on the bill will go smoothly," Mr Amnuay said before the meeting, which was not televised.

"I would like to ask all MPs to come into the House chamber to perform their duty and not to do anything else outside."

Cecile Pouilly, spokeswoman for the Office of the UN High Commissioner for Human Rights, said the bill being taken up this week by the parliament could pardon people involved in abuses during the military crackdown on anti-government protesters in 2010.

She told reporters Tuesday in Geneva the Thai government must ensure any amnesty measure "excludes those who are responsible for human rights violations and to take steps to prosecute perpetrators of such violations''.

Ms Pouilly said the government would set an important precedent if it follows its own commission's recommendations and holds perpetrators accountable for some 90 deaths and injuries to thousands more people during the crackdown.