A mob attacked Muslim properties in north-western Myanmar after authorities refused to hand over a man suspected of attempted rape, police said on Sunday.

"Shops and houses were destroyed, some burned down, by the mob last night," said a local police officer who requested anonymity.

About 1,000 Buddhists reportedly participated in the anti-Muslim rampage that broke out shortly before midnight in Kantbalu town, of Sagaing division.

The mob had demanded that police hand over a Muslim man suspected of attempting to rape a 19-year-old Buddhist woman.

Outnumbered police attempted to disband the angry crowd but failed to prevent the destruction of at least seven Muslim-owned shops and 15 houses, residents said.

The situation appeared to be calm by mid-day Sunday, sources said. 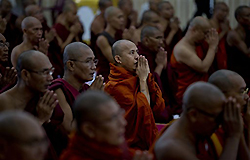 In this June 13, 2013 photo, controversial Buddhist monk Wirathu, centre, who is accused of instigating sectarian violence between Buddhists and Muslims through his sermons, performs Buddhist rituals during an assembly of Myanmar’s powerful Buddhist clergy in Hmawbi, outskirts of Yangon, Myanmar. Wirathu is a charismatic speaker and supporter of the fundamentalist 969 movement. His following is growing as he crisscrosses the country calling for boycotts of Muslim-owned shops and a ban on marriages between Buddhist women and Muslim men, and warning that a higher birthrate could one day bring Muslims from 4% of the population to a majority. (AP Photo)

Myanmar's radical monk Wirathu, whose anti-Muslim rhetoric has placed him at the centre of rising religious violence, said on his Facebook page that hundreds of people took part in the riot on the outskirts of Kantbalu.

When police refused, they started setting buildings on fire, he said.

About 35 houses and 12 shops — most belonging to Muslims — were destroyed before calm was restored, he said.

Tomas Ojea Quintana, United Nations special rapporteur for human rights in Myanmar, visited Meiktila earlier this month. His car was attacked by a mob of 200 Buddhists "who proceeded to punch and kick the windows and doors of the car while shouting abuse," he said later.

"The fear that I felt during this incident, being left totally unprotected by the nearby police, gave me an insight into the fear residents would have felt when being chased down by violent mobs during the violence last March as police allegedly stood by as angry mobs beat, stabbed and burned to death some 43 people."

Myanmar, a predominantly Buddhist country of 60 million people, has been grappling with sectarian violence since the country's military rulers handed over power to a nominally civilian government in 2011.

More than 250 people have been killed — most of them Muslims — and 140,000 people displaced, most of them belonging to the Rohingya Muslim ethnic minority group.

The unrest began last year in the western state of Rakhine, where Buddhists accuse the Rohingya Muslim community of illegally entering the country and encroaching on their land. The violence, on a smaller scale but still deadly, spread earlier this year to other parts of Myanmar and has stirred up prejudice against Muslims.