Three members of an explosive ordnance disposal team were killed in a bomb blast while examining another device next to the Phetkasem Highway in Bacho district of Narathiwat province yesterday. 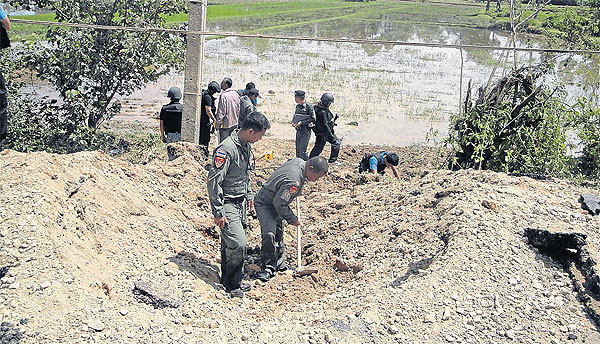 Security officers inspect an area at the side of the Phetkasem Highway in Bacho district of Narathiwat where abombexploded, killing three membersof an explosive ordnance disposal team. WAEDAOHARAI

Members of the provincial bomb squad had rushed to the scene, near Ban Sompoy in tambon Kayo Mati, following a report that a bomb was thought to have been planted in a hole next to the road.

The bomb squad turned on a mobile phone signal jammer while examining the hole, and confirmed there was a bomb there.

A chief warrant officer identified only as Somkiat, of Narathiwat Task Force 32, was wounded in the explosion, which also damaged a Toyota pickup truck containing the signal jammer used by the bomb squad.

Pol Sub Lt Polawat Thepsorn and other bomb disposal team members continued to scour the scene and found another bomb inside a 50kg gas cylinder, connected to wires leading to nearby trees. They disabled it with a water cannon.

In Pattani's Yarang district, a combined force of police, rangers and officials yesterday arrested a suspect in the 2006 abduction and killing of a teacher in a raid on a house, police said.

They raided the house in Darusalam village of tambon Mo Wawi in Yarang district about 2am.

The forces were acting on information that Mayiding Jaru, 29, a suspect wanted under a 2007 court warrant for the shooting of Pol Snr Sgt Maj Phurit Wanthong on Feb 12 of that year, was hiding there.

The security team did not find Mr Mayiding but instead arrested Ahama Kajeh, from Narathiwat's Rangae district, who is a Runda Kumpulan Kecil suspect wanted on two warrants.

Under the first warrant, Mr Ahama was suspected of involvement in the abduction of Juling Pongkanmoon, 24, a teacher at Kuchingrupa School, on May 19, 2006. She was later found beaten to death.

Under the other warrant, he was wanted for a shooting attack on a train on June 21, 2008, in which three railway officials and a police officer were killed and a policeman injured.

In Bangkok, Education Minister Chaturon Chaisaeng said the cabinet had yesterday approved an increase in a special subsidy on educational quality development for each teacher in the deep South, from 1,000 baht to 2,500 baht.

Teachers will begin receiving the 2,500 baht at the end of this month. The payments are funded by a 373-million-baht budget, Mr Chaturon said.