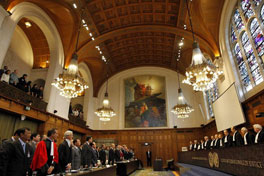 A view of the Preah Vihear temple trial between Cambodia and Thailand in the hall of the Peace Palace, at the International Court of Justice (ICJ) in The Hague, The Netherlands, on Monday. (EPA Photo)

The United Nations' highest court did not specify precisely how the area in the ruling maps onto that which is claimed by Cambodia, saying only that it should correspond with the natural promontory, and that the border line did not have to follow the watershed, as Thailand has argued.

The ICJ also reiterated the 1962 provision that obliged Thailand to withdraw all security troops from the temple's vicinity.

However, the court rejected Cambodia's claim that it was also awarded a nearby hill by the 1962 ICJ ruling that was being interpreted in Monday's judgment. Known as Pheu Makheu in Thailand and Phnum Trap in Cambodia, the hill falls under the disputed 4.6 square kilometre area.

The decision was welcomed in Cambodia, which claims the 4.6-km area around the temple is needed to access the World Heritage Site.

"This is the victory of all the nation and the reward to the political maturity of the current Royal government of Cambodia," Information Minister Khieu Kanharith said on his Facebook page.

Foreign Minister Surapong Tovichakchaikul said in The Hague that both sides are satisfied with the court's decision. After this, the two counties will hold talks in a panel planned to jointly develop the area, Mr Surapong said.

Foreign Minister Surapong Tovichakchaikul, right, and his Cambodian counterpart Hor Namhong shake hands during the Preah Vihear temple trial at the International Court of Justice (ICJ) in The Hague, The Netherlands, on Monday. (EPA Photo)

Virachai Plasai, Thai ambassador to the Hague and leader of the legal team, said Cambodia had only won a small piece of the 4.6-kilometre disputed territory. "We are still calculating the exact amount," he said.

The "small area" mentioned by the court needed to be further interpreted, he said.

Puangthong Pawakapan, a political scientist at Chulalongkorn University, told Modern Nine television channel that the ruling put an end to disputes over the area, involving protests by many groups.

The 11th-century Preah Vihear temple complex is situated on a steep-sided promontory that juts south into the Cambodian plain, making access - including tourism - difficult without access from the northern, Thai side.

The judgment was expected to spark further opposition in Bangkok, where hundreds of protesters petitioned the Defence Ministry earlier Monday to reject the ICJ's authority over the dispute.

In Phnom Penh, about 20 military police were deployed outside the Thai Embassy ahead of the ruling, but there was no sign of protests in the city, and only 10 officers were on guard by the afternoon.

In 1962, the ICJ ruled that the temple complex itself was on Cambodian soil, but did not rule on the border line around it, leaving the door open for further disputes.

Cambodia reopened the case in 2011 after Preah Vihear temple was listed as a Unesco World Heritage site in 2008, reigniting the dispute over the surrounding land, and sparking clashes between Thai and Cambodian troops.

Monday's ICJ ruling comes at a vulnerable time for government. The blanket amnesty bill that could pave the way for former premier Thaksin Shinawatra to return to Thailand is currently being debated by the Senate and has prompted mass anti-government protests in Bangkok since Nov 1.

Prime Minister Yingluck Shinawatra said in a statement over the weekend that Thailand and Cambodia have to work together to maintain good relations, regardless of the outcome of the ICJ ruling.