A few years ago, Suthep Thaugsuban was a suit-and-tie wearing deputy prime minister of Thailand and a senior executive of the country's oldest political party.

Now, the 64-year-old career politician has ditched his office attire, distanced himself from the opposition Democrat Party and found a new calling as a street fighter.

Mr Suthep is the mastermind of Thailand's latest round of street protests and has vowed to topple Prime Minister Yingluck Shinawatra by taking over every government ministry. After storming the Finance Ministry earlier this week and camping there two nights with thousands of supporters, Suthep marched into a sprawling government office complex where he remained locked Thursday in a standoff with police, refusing to leave.

His group, the largest, said it will pause to rest and will not march Thursday, although smaller, allied groups of protesters are expected to converge on Bangkok's police headquarters. 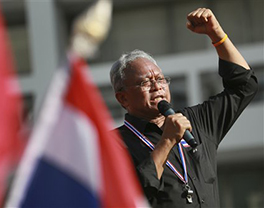 "We like peaceful methods," Mr Suthep told reporters, his voice hoarse from speaking above the crowd's roar. But he added, "If we don't succeed, then I am prepared to die in the battlefield." (AP Photo)

"We like peaceful methods," Mr Suthep told reporters, his voice hoarse from speaking above the crowd's roar. But he added, "If we don't succeed, then I am prepared to die in the battlefield."

"The people will quit only when the state power is in their hands," he said. "There will be no negotiation."

The protests represent the biggest threat yet to Ms Yingluck's embattled administration, and they have raised fears of fresh political violence in the divided Southeast Asian nation. So far they have been peaceful.

On Wednesday, whistle-blowing throngs massed inside or around at least six of the government's 19 ministries, although they left half of them after a few hours. In a city of 10 million people, though, the demonstrators appeared to number in the tens of thousands — far less than the 100,000-plus mustered when they began Sunday.

The numbers indicate they are unlikely to bring down the government on their own without more popular support, or judicial or military intervention.

Ms Yingluck has repeatedly said she wants to avert violence and offered to negotiate an end to the crisis. Security forces have not even fired tear gas to prevent protesters from forcing the closure of multiple government offices. A warrant was issued for Suthep's arrest, but he has ignored it.

"We must not regard this as a win-or-lose situation," Yingluck told reporters at Parliament on Wednesday. "Today no one is winning or losing, only the country is hurting."

On Thursday, lawmakers will vote on a parliamentary no-confidence motion to unseat Ms Yingluck. The motion is expected to fail as Ms Yingluck's party controls the House of Representatives.

United Nations Secretary-General Ban Ki-moon called on all sides to avert violence and "resolve their differences through genuine dialogue and peaceful means," according to his spokesperson.

Protesters want the premier to step down amid claims she is a proxy for her brother, billionaire former prime minister Thaksin Shinawatra, who was ousted in a 2006 military coup but remains central to Thailand's long-running political crisis. Thaksin lives overseas to avoid a corruption conviction that he says was politically motivated.

In broad terms, Thailand's political crisis pits Thailand's elite and the educated middle-class against Thaksin's power base in the countryside, which benefited from populist policies designed to win them over. Thaksin's party is the most successful in modern Thai political history. He became the only prime minister to serve out a full term, and Thaksin or his allies have won every election since 2001. The Democrats were crushed by Ms Yingluck's ruling party during the election that brought her to power in 2011.

In 2010, when Mr Suthep was deputy prime minister under a Democrat government, he signed an order that authorized the military to disperse Thaksin's red shirt protesters who had occupied a large section of downtown Bangkok. The eight-week protests and crackdown left more than 90 people dead and about 1,800 injured. It was Thailand's worst political violence in decades.

The anti-government campaign started last month after Ms Yingluck's ruling Pheu Thai party tried to pass an amnesty law that would have enabled Thaksin to return home as a free man. The Senate rejected the bill in a bid to end the protests, but the rallies gained momentum.

Mr Suthep seized the opportunity to step into the spotlight. He resigned as an opposition lawmaker in mid-November to lead the demonstrations, which morphed into a wider anti-government campaign with ever-shifting strategies.