Authorities are on high alert after 27 people were injured in an explosion in downtown Sadao district of Songkhla on Sunday. 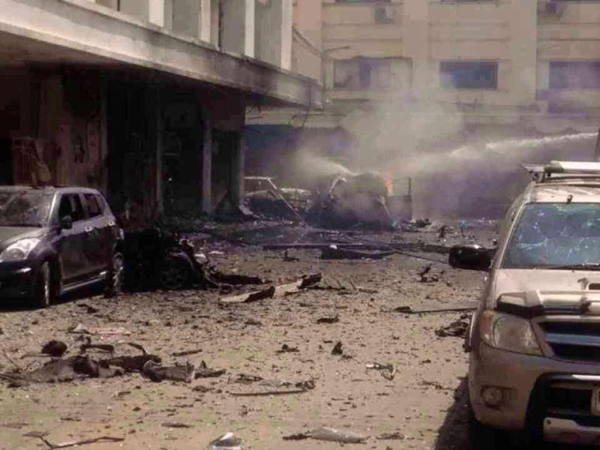 A bomb in Sadao district in Songkhla province on Sunday, Dec 22, 2013 damaged at least four vehicles. (Photo by Wichayant Boonchote)

Security has also been tightened in Phuket after a vehicle stolen from the far South was found parked behind a police station in the resort province, with explosives planted inside.

The 27 people injured include a girl. Four are in serious condition after the string of bomb attacks which started about noon.

The bombs went off at three locations in Sadao district. Earlier reports said there were four bombs.

Of the injured, six were being treated at Sadao Hospital, 17 others at Padang Besar Hospital and four at Songkhlanakharind Hospital, Songkhla governor Kritsada Boonraj said.

The first blast, a powerful car bomb, went off around noon near the Oliver Hotel in the heart of the tourist area of Ban Dannok in tambon Samnak Kham municipality.

The blast damaged the hotel and more than 20 shops and entertainment venues in the area.

Traffic increased at the Thai-Malaysian border checkpoint in the district as people rushed back to Malaysia.

About two hours earlier, a bomb disposal unit defused devices found in front of a McDonald's restaurant and outside the Lotus Express store in the tambon. Later in the afternoon, a motorcycle bomb went off in the parking lot at the Padang Besar police station and another bomb exploded in the parking lot of Sadao police station. No casualties were reported.

Col Banphot discounted the possibility the latest violence would bring Sadao district, which has been relatively peaceful, into the separatist hotbed.

He said large quantities of untaxed goods had been seized in the district in recent months. This might be a possible link to the violence.

Meanwhile, bombs were found on a stolen pickup truck outside a Phuket police station.

Bomb disposal officers managed to defuse the devices. It is the first time a suspected car bomb has been discovered in Phuket.

Checks found the pickup truck had belonged to Vithan Yachamnarn, 34, who was shot dead in front of a construction shop in Sai Buri district of Pattani on May 9 by gunmen who then stole his vehicle.

Security authorities were concerned southern insurgents might be trying to expand their target areas from the deep South to other southern provinces.