The Network of Students and People for the Reform of Thailand (NSPRT) has asked the navy to review its impending transfer of Naval Special Warfare Command commander Winai Klom-in. 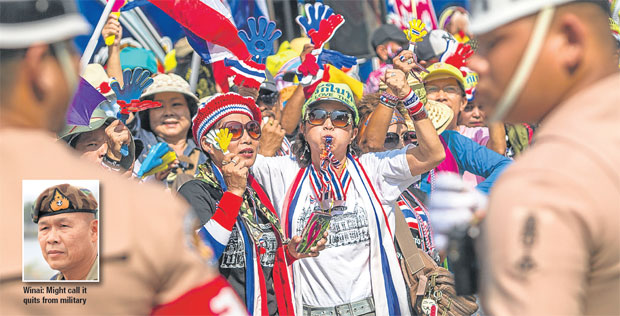 Supporters of the Network of Students and People for Reform of Thailand picket outside the navy headquarters in Bangkok, following reports of the transfer of Naval Special Warfare Command (Seal) commander Winai Klom-in, who is suspected of supporting anti-government protesters. Pattarapong Chatpattarasill

The protest group yesterday handed a petition letter to a navy representative as it led its supporters to gather at the navy headquarters near the Temple of Dawn.

NSPRT adviser Nitithorn Lamlua said he believed the Royal Thai Navy has "allowed politics to interfere" with its 2014 reshuffle of naval officers, an act that he and NSPRT supporters cannot accept, especially if Rear Adm Winai is moved to an inactive post.

Rear Adm Winai is tipped to be removed from the top job at the Sea-Air-Land (Seal) unit after making frequent comments about the anti-government rallies which subsequently sparked criticism he was taking the side of the People’s Democratic Reform Committee.

The arrests of Seal and ex-Seal officers allegedly mingling with the protesters raised questions about the Seals' role in the political conflict.

Earlier this month navy chief Adm Narong Pipattanasai met caretaker Prime Minister Yingluck Shinawatra, who is also caretaker Defence Minister, in a closed-door meeting to discuss the Seal arrests and, according to a source, Adm Narong also "apologised" to Ms Yingluck for any trouble the Seals had caused.

"If the navy chief cannot resist political interference, I would like to ask him to let the public know who proposed the transfer in the Defence Council," Mr Nitithorn said.

It is feared the transfer will lead to problems over Rear Adm Winai’s successor. A Defence Ministry source said Rear Adm Thanee Phudphad will be moved from the naval fleet commander to be the new Seal chief.

If Adm Narong ignores the NSPRT request, Mr Nitithorn said he will lead protesters to see him again.

The promotions and transfers depend on decisions of officers’ commanders, Gen Niphat insisted.

The reshuffle list was then approved and signed by Ms Yingluck in Chiang Mai on March 13, the same military source said.

Commenting on the report of Rear Adm Winai’s transfer, Gen Niphat said, it can be viewed as an "issue of taking responsibility" after some Seal officers were alleged to have been involved in the anti-government protest.

In addition to the NSPRT, a group calling itself the People’s Network for the Protection of the Country yesterday gathered at the Defence Ministry to submit a letter protesting against Rear Adm Winai’s transfer.

Rear Adm Winai said yesterday he would wait to see what his new position will be before making a decision as to whether to end his military career.

"If I am transferred to other positions which do not require my ability to work under pressure, I might call it quits,” said Rear Adm Winai, who has operated the Seal unit for three years and has two more years left until retirement.

The military source said his new position would be the chief assistant to the navy commander and he might not be promoted from rear admiral.

The reshuffle list is expected to be sent to the Defence Ministry this Monday.