KUALA LUMPUR: The mystery of the vanished Malaysia Airlines flight MH370 deepened Saturday after it was revealed the aircraft’s communications were deliberately disabled and it may have flown for another seven hours after its last signal was transmitted, possibly over northern Thailand. 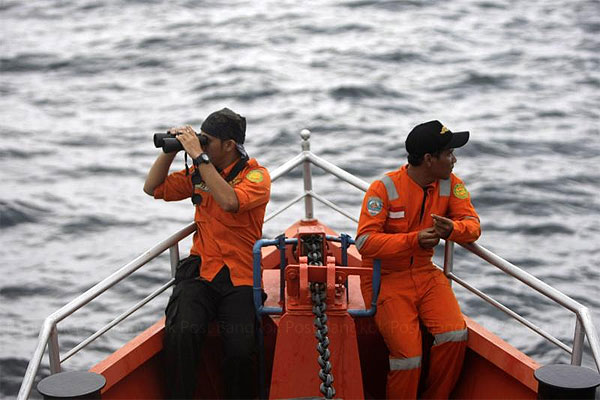 All at sea: Indonesian Search And Rescue personnel take part in a search operation for the missing aircraft in the Indian Ocean, near the tip of Sumatra Island, Indonesia, yesterday.

A government source said Malaysia had asked if Thailand could check both its civilian and military radar records to see if they had tracked the flight.

Malaysian Prime Minister Najib Razak, while refusing to confirm it was a hijacking, ended days of speculation when he said the disappearance of the Boeing 777-200, which vanished eight days ago while flying from Kuala Lumpur to Beijing, was not accidental.

He said the investigation into the disappearance would refocus on the flight crew and passengers, underlining the massive task for searchers who have already scoured vast areas of ocean.

"Clearly the search for MH370 has entered a new phase," Mr Najib said, stressing that investigators were looking into all possibilities as to why the plane deviated so drastically from its original flight path.

Earlier, a Malaysian government official called the plane's disappearance a hijacking, though he said no motive had been established and no demands had been made known. 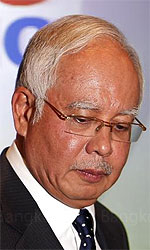 Police on Saturday morning visited the residential compound where the missing plane’s pilot lives in Kuala Lumpur. Authorities have said they will be investigating the pilots as part of their probe, but have released no information about how they are progressing.

Malaysian police have already said they are looking at the psychological state, family life and connections of pilot Zaharie Ahmad Shah, 53, and co-pilot Fariq Abdul Hamid, 27. Both have been described as respectable, community-minded men.

Experts have previously said that whoever disabled the plane's communication systems and then flew the jet must have had a high degree of technical knowledge and flying experience. One possibility they have raised was that one of the pilots wanted to commit suicide.

The plane was carrying 239 people when it departed for an overnight flight from Kuala Lumpur to Beijing at 12.40am on March 8. The plane’s communications with civilian air controllers were severed about 1.20am, and the jet went missing — heralding one of the most puzzling mysteries in modern aviation history. Investigators now have a high degree of certainty that one of the plane’s communications systems — the Aircraft and Communications Addressing and Reporting System — was disabled before the aircraft reached the east coast of Malaysia, Mr Najib said. Shortly afterward, someone on board then switched off the aircraft’s transponder, which communicates with civilian air traffic controllers.

The prime minister then confirmed that Malaysian air force defence radar picked up traces of the plane turning back westward, crossing over peninsular Malaysia into the northern stretches of the Strait of Malacca.

Satellite transmission data analysed by US investigators showed the jet may have flown to a position about 1,600km west of Perth, Australia, an anonymous source close to the investigation told Bloomberg.

The plane’s last known position was fixed by analysing pings from a transmitter that sent signals to a satellite about once an hour for four to five hours after the plane changed course and its transponder beacon went dead.

Investigators narrowed the missing Malaysian jetliner’s possible routes by mapping hours of satellite contacts that continued after the plane’s main communications systems were turned off, according to three people familiar with the work.

The pulses provide no data about the plane’s speed, location or altitude. Still, they allow calculations of an arc along the Earth’s surface where the plane was each time it communicated with the satellite. Mr Najib said the last confirmed signal between the plane and a satellite came at 8.11am — seven hours and 31 minutes after take-off.

This was more than five hours later than the previous time given by Malaysian authorities as the possible last contact.

Airline officials have said the plane had enough fuel to fly for up to about eight hours.

“The investigations team is making further calculations which will indicate how far the aircraft may have flown after this last point of contact,” Mr Najib said.

He said authorities had determined that the plane’s last communication with a satellite was in one of two possible “corridors” — a northern one from northern Thailand through to the border of the Central Asian countries Kazakhstan and Turkmenistan, and a southern one from Indonesia to the southern Indian Ocean.

Mr Najib said the search in the South China Sea, where the plane first lost contact, had ended.

Two-thirds of the plane’s 227 passengers were Chinese, and the Beijing government is under pressure to give relatives firm news of the plane’s fate. Beijing urged Malaysia to “expand and clarify the search areas based on the latest information and step up search efforts” and involve more countries in the search.

Mr Najib said that from day one, the country had been sharing information with international investigators, even when it meant placing “national security concerns” second to the search, a likely reference to its release of military radar data.

In the Chinese capital, relatives of passengers who have anxiously awaited news at a hotel near Beijing’s airport said they felt deceived at not being told earlier about the plane’s last signal. “We are going through a roller coaster, and we feel helpless and powerless,” said a woman, who declined to give her name.

Fourteen countries, 43 ships and 58 aircraft are involved in the search.

The Thai navy yesterday resumed its search in the Andaman Sea at the request of Malaysia, navy chief of staff Adm Thaweewut Pongpipat said. The navy had earlier yesterday cancelled its search operations.

The Indian navy’s search has so far covered more than 250,000 square kilometres in the Andaman Sea and the Bay of Bengal “without any sighting or detection”, the Defence Ministry said.

The search has been expanded to the central and eastern sides of the Bay of Bengal, the ministry said.