A former special branch police officer and owner of a petrol station was shot to dead and burned in Yaha district of Yala province on Monday morning, police said. 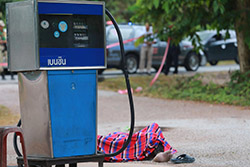 The body of the former special branch police officer lies on the ground outside the petrol station he owned in his retirement in Yala.

Police said that according to witnesses, Pol Sr Sgt Maj Ekapong Sakdayuth, 65, was attacked at his petrol station about 6.50am.

Two men arrived on a motorcycle, idicating they wanted to buy fuel. Then they opened fire at him.

When Ekapong fell to the ground, they poured petrol on his body and set him on fire.

The two then walked into the office and took a notebook computer, cash and a bag containing documents before fleeing.