A new military unit, the “Budo Task Force”, has been set up with a special mission to seek out and destroy insurgent hideouts in the Budo Mountains in the deep South. 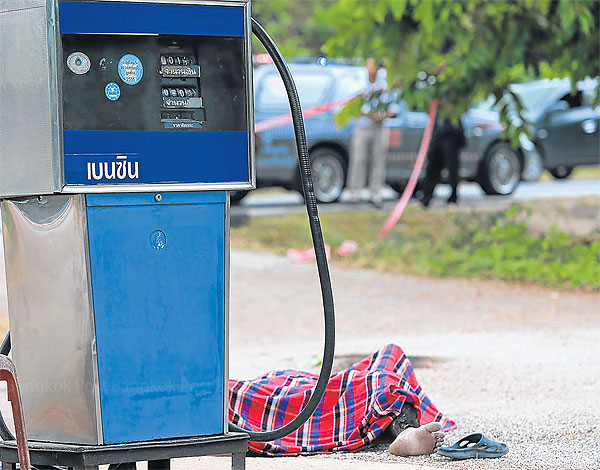 The burnt body of Pol Snr Sgt Maj Ekapong Sakdayuth, a former special branch police officer, lies in front of his petrol station in Yala’s Yaha district. The man is believed to have been shot dead by insurgents and his body set on fire yesterday morning. Muhammad Ayub Pathan

The move, which follows several raids on militant camps in the region, aims to prevent remote mountain areas from being used as training grounds by the separatist movement, army chief Prayuth Chan-ocha said yesterday.

The army chief was speaking during a visit to insurgency-torn Narathiwat and volunteers of the 4109th Ranger Company which patrols Budo mountain.

Budo is one of four mountain ranges that cover the three southernmost provinces of Pattani, Yala and Narathiwat, which have a population that is predominantly Muslim.

Separatist groups have been using the Budo mountain range as a major base to train militants for insurgency operations in both rural and urban areas, according to authorities.

The army is aware of insurgent activities so has divided its troops into three sections to make sure the military can provide security in cities, rural areas and forests.

“We need to spread our forces out to provide safety for the public,” Gen Prayuth said.

There have been many missions conducted in the Budo mountain range. In August last year security forces raided an insurgent camp in the mountains in Narathiwat’s Bacho district, and seized a quantity of ammunition and military-style camping equipment.

The camp was the 11th discovered by the authorities since operations began in the mountains in March, 2012.

Despite mounting full-scale security missions in the far South, Gen Prayuth admitted yesterday it was still an uphill task to bring peace to the region since several militant groups want to pursue violent means to achieve their goals.

He said most concern lies with protecting “soft targets”, such as teachers, monks, and the public.

Military security operations can cover almost all urban areas but troops are stretched when it comes to more remote areas, Gen Prayuth said.

Meanwhile, a former special branch officer was yesterday shot dead and his body set on fire at a petrol station he owned in Yala’s Yaha district, police said.

Pol Sr Sgt Maj Ekapong Sakdayuth, 65, was attacked about 6.50am, according to witnesses.

Two men arrived on a motorcycle and asked for fuel before pulling out guns and shooting him in the head and chest.

The killers then poured petrol over Ekapong and set him on fire.

Before fleeing, the men walked into Ekapong office and took a notebook computer, cash and a bag containing documents. Police believe Ekapong’s death is linked to the insurgency.

The attackers are suspected of being members of a network led by Ubaidila Rommueli, an insurgent leader in Yaha district, police said.

Elsewhere, Their Majesties the King and Queen sent a wreath to the funeral of Siriporn Srichai, 42, a female teacher who was shot dead and set on fire in Yala’s Mayo district on March 13.

Siriporn was riding a motorcycle to work at Tabing Tingi Community School in tambon Luboyirai when she was shot.