Investigations into two suspected foreign terrorists are progressing swiftly as one of the men admitted to a planned attack on Israeli tourists in Khao San Road during Songkran, according to an investigator.

The source announced progress in the probe after Thai media yesterday reported the suspected terrorists have been held for questioning since the beginning of Songkran.

They were arrested on suspicion of links to militant Islamist group, Hezbollah. 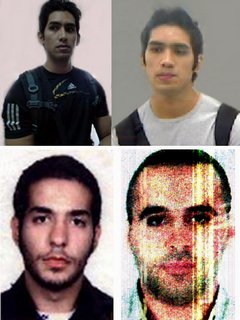 Top: Youssef Ayad is described as a Lebanese-Filipino Shia and Hezbollah ESO operative. Daoud Farhat (bottom left) is said to be a French-Lebanese national, while Bilal Bahsoun, whereabouts currently unknown, is also reportedly of Lebanese origin. (Photos from Stop910.com)

The men have been identified as French-Lebanese national Daoud Farhat and Lebanese-Filipino national Youssef Ayad.

According to their passports, both were born in Lebanon, though authorities have yet to confirm if the travel documents are genuine.

Mr Farhat is visiting Thailand for the first time, while this is Mr Ayad's 17th visit to the country.

Both arrived several days before the Songkran festival started on April 13.

Assistant national police chief Winai Thongsong said the men were arrested at different locations in Bangkok after Thai police received intelligence from Israel about a planned attack on Israeli tourists during Passover, the Jewish festival which coincided with Songkran.

The source said investigators believe at least nine suspected foreign terrorists connected to Hezbollah are somewhere in Thailand. Authorities are attempting to track them down, he said.

The source also said Mr Ayad had given useful information to police.

He admitted his group entered Thailand to carry out a bomb attack against Israeli tourists and other Israeli groups on Khao San Road during Songkran.

"Now we can seize materials, such as nails and bolts, used in making bombs from their homes in Bangkok.

"We are taking the holder of the Philippines passport to Rayong province to search for more bomb-making material kept there," the source said.

The location of the stash in Rayong has not been revealed as the suspect did not know the name of the place, but told investigators he could remember where it was.

"If we had been unable to arrest the men during Songkran, a bomb attack would certainly have taken place somewhere on Khao San Road," he said.

Khao San Road is a popular destination among Israeli tourists.

Pol Lt Gen Winai said the two suspected foreign terrorists will be deported back to the last countries they travelled from immediately after Thai police finish questioning them.

He did not name the countries.

"They are still being questioned thoroughly. We have not yet pressed any charges against them.

"Once we finish questioning them, we will deport them," Pol Lt Gen Winai said.

Both Mr Farhat and Mr Ayad are listed on the website Stop910.com, which collects information on suspected terrorist cells operating in Asia, and carries notices of financial rewards for information.

According to immigration police, the third suspect, Bilal Bahsoun, may not have entered Thailand.