Foreign tourists warned to be careful after takeover
Thailand
General

Foreign tourists warned to be careful after takeover

Foreign tourists are being urged to take greater care when visiting Thailand, with 31 countries and territories adjusting their travel advisories after Thursday's military coup.

Led by the United States, Canada, Britain, Germany, Switzerland, China and Japan, the countries added information about the coup and curfew in their advisories and suggested their citizens be more careful and closely monitor the situation.

They should avoid travelling near protest or crowded areas or areas related to military and security actions.

After the martial law declaration, eight countries adjusted their travel advisories. Only Hong Kong and the Philippines raised the levels of their advisories after the coup. 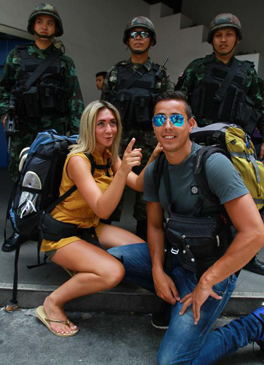 Foreign tourists are being urged to take greater care when visiting Thailand, with 31 countries and territories adjusting their travel advisories after Thursday's military coup. (Photo by Somchai Poomlard)

Susdivachr Cheewarattanaporn, president of the Association of Thai Travel Agents (ATTA), said some hotel and tour cancellations will be seen very soon on the back of safety concerns, while travel insurance policies will not cover losses incurred during the coup or curfew.

Thawatchai Arunyik, governor of the Tourism Authority of Thailand (TAT), said the coup and curfew have affected tourism sentiment, and foreign travellers are in a state of shock.

The TAT expects Thailand will miss the 2014 tourist arrival target of 28 million, with a new, unofficial projection of 26.2 million.

However, tourism revenue is set to rise to 1.4 trillion baht from the previous target of 1.3 trillion thanks to an upturn in the number of European tourists.

"We will be more aggressive. I have assigned all deputies to create new campaigns and activities to recover tourism right away once the political situation is back to normal," Mr Thawatchai said.

He said details of the new campaigns will be finalised next Thursday. Repeat tourists, who account for 60% of international arrivals, and free independent travelers (FITs) will be the first market to focus on.

The TAT believes repeat tourists and FITs understand Thailand and are not panicking about the situation.

ATTA projects the number of arrivals through members will drop by at least 50% this year. Tourists received this year at Suvarnabhumi airport as of Tuesday had decreased in number by 38.8% to 1.13 million.

Private tourism operators believe the market will be restored within three months after the conflict ends. Supawan Tanomkietipume, vice-president of the Thai Hotels Association, said hotels were posting notices not to go out from 10pm to 5am.