Medical staff fear they will be next targets

Violence continues to flare in Pattani as a bomb blast Wednesday at a hospital car park injured 10 people including a soldier.

Four days after deadly attacks last Saturday that plunged Pattani into a grim mood, the bombing at the Khok Pho hospital further deepened villagers’ concerns over their safety at public places.

The hospital attack also raises new fears that medical staff could be targeted in future bombings.

A motorcycle parked among other vehicles in the car park exploded at 9.30am and spread fires to adjacent areas.

Those injured included Pvt Phonlawat Nonthasen. The most seriously wounded in attacks that have left two dead and more than 70 wounded was a three-year-old girl, maimed for life when doctors had to amputate the remains of her right leg after it was mangled by the blast.

She was one of two victims seriously injured and taken to Pattani Hospital. 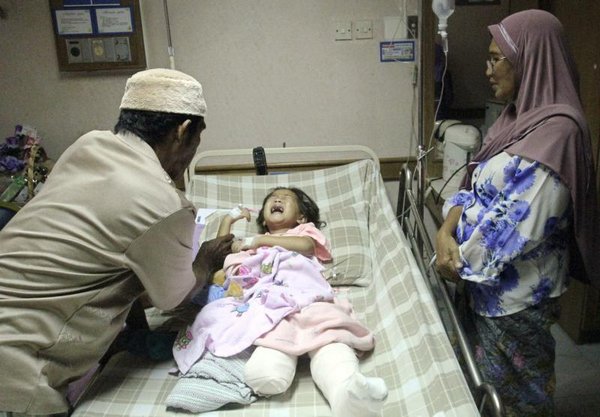 Bomb victims since Saturday include three-year-old Vaesiteeaija Vaelong, who lost her foot and lower leg, and could not be consoled even by her father, Marodee Vaelong (left) and mother Nada. (EPA photo by Abdullah Wangni)

Firemen brought the fire under control but 50 motorcycles were damaged by the bomb and the fire.

An initial inspection found attackers planted an explosive device in a motorcycle and left it at the car park. The device was exploded with a mobile phone.

Security officers sealed off the area to collect evidence.

The explosion followed the separate bombing and shooting attacks in Pattani’s Muang district on Saturday night.

Police put the number of casualties at 58, including three dead people.

While the Saturday attacks targeted business outlets and public utilities including 7-Eleven convenience stores, the Office of the Provincial Electricity Authority, an electrical post and a petrol station in Muang district, the bombing of the hospital brought fresh worries to medical staff and patients.

The attacks have prompted police and military officers to bolster security in this predominantly Muslim province.

In the neighbouring province of Yala, a village head was shot dead by an unknown gunman in Yaha district, police said.

Police officers found the body of Abdunhaleng Bueraheng, head of Moo 8 village in tambon Yaha, near a food stall in the local market.

He went to the market to buy food and while he was returning home, two men approached him from the back and one of them fired a gun at the back of his head, police said.

The attackers seized the victim’s pistol and fled.

Investigators believe they were members of a militant separatist group.

Meanwhile, a navy officer of the Narathiwat Task Force 31 was shot by his colleague following a heated argument at a food shop in Narathiwat’s Tak Bai district, police said.

Sub Lt Thanat Asoko surrendered to police after he allegedly shot his colleague Lt Ekkaphon Thongraksa out of anger. 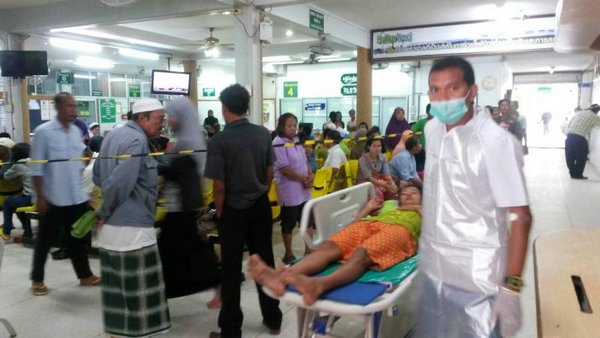 Bomb victims were taken to another hospital in Muang district of Pattani. It was the first-ever such attack on a care centre since the resurgence of the southern insurgency in January, 2004. (Photo by Abdulloh Benjakat)