The Betong bomb attack in the far South on Friday involved a small explosive device designed to draw the attention of onlookers, and a devastating one intended to kill and cause property damage, according to forensic authorities. 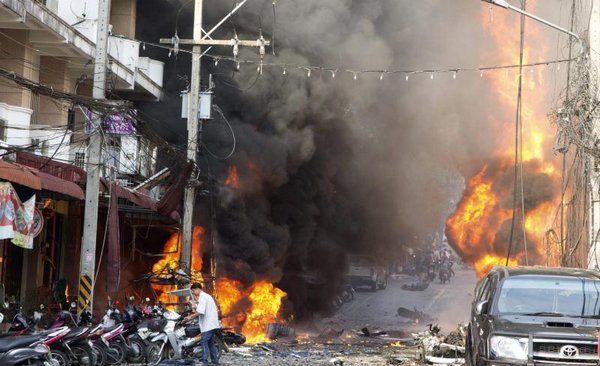 Friday's car bombs killed two and wounded more than 40 in a direct challenge to NCPO claims they had successfully lowered the violence during Ramadan. (EPA photo)

Findings by forensic officers Sunday showed two explosives were used in the deadly attack. They were packed in a pickup truck parked outside the Holiday Hill Hotel in Yala's Betong district.

A small bomb exploded causing minor damage to the truck, according to a witness. A second, 15kg bomb hidden in a gas cylinder and detonated by mobile phone, went off 10 minutes later about 4.50pm, killing two people and injuring 52. The blast scene is on Bhakdi Road, a busy commercial and residential area. The explosion also damaged nearby houses and buildings, a convenience store, cars and motorcycles.

Witnesses confirmed an explosion was heard about 10 minutes before the fatal bomb attack occurred. Kanchana Sawayo, a massage therapist, said she heard the sound of the blast from the pickup truck.

She said the explosion did not damage the pickup truck much, although the headlights of the vehicle came off.

Ten minutes later, the major explosion followed, she said. Yala governor Dejrat Simsiri said 500,000 baht in compensation has been given to the relatives of each of the dead victims, while the 52 people who were injured have received compensation worth a combined 500,000 baht.

He said a total of 43 buildings and shophouses, seven cars and 35 motorcycles were damaged in the explosion.

Total damage was estimated at more than 29 million baht, Mr Dejrat said, adding efforts will be made to speed up compensation payments.

The attack frightened tourists away from the district's popular fruit-eating festival, as well as planned celebrations of the Hari Raya festival that marks the end of the fasting month of Ramadan.

Many tourists were now checking out of their hotels and cancelling hotel bookings, Pol Sub Lt Udom said.

The association will meet business operators to plan activities to draw tourists back to Betong.

Noppong Thiraworn, president of the Yala Chamber of Commerce, said attacks in Betong had fallen significantly over the past eight years until Friday's blasts.

The chamber of commerce would also do its bit to restore confidence and boost the economy, Mr Noppong said.

On Sunday in Songkhla, many Malaysian and Singapore tourists continued to stream into the southern province via the border checkpoint at Sadao district, amid tight security following the Betong bomb attack.

Many tourists shifted their destinations from Betong to Hat Yai district.

Intelligence reports have indicated Songkhla's major commercial hubs, including the districts of Hat Yai, Muang and Sadao, could be the target of further insurgent attacks coinciding with the end of Ramadan.

Malaysia’s central bank on Wednesday raised its benchmark interest rate for a second straight meeting in a bid to tame inflation and signaled more measures going forward will be gradual.