Police are claiming they will make the first arrest in the murder of two British backpackers on Koh Tao by Saturday.

Pol Lt Gen Panya Mamen, the southern Region 8 police division commander who took over as assistant national police chief today, said Wednesday that authorities have short-listed ten potential suspects and should arrest, or at least obtain a warrant for, one suspect within two or three days. 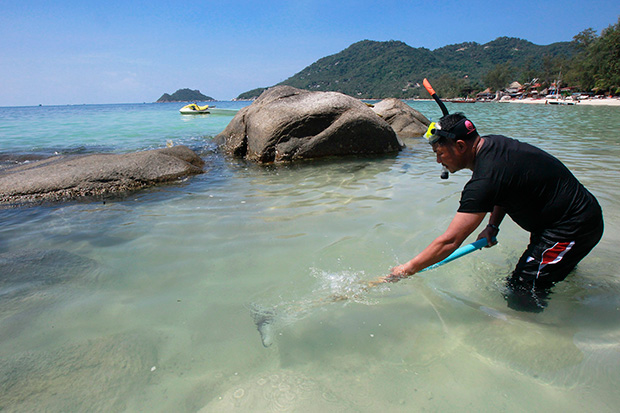 A police forensics technician searches for clues near the spot where the bodies of the two British tourists were found. A piece of litter recovered near the scene contains DNA from one suspect, a source said. The litter was tracked back to a convenience store where the buyer was seen on video. (Reuters photo)

Police have been under tremendous pressure to arrest those responsible for the Sept 15 killing and rape of Hannah Witheridge, 23, and the murder of David Miller, 24. In the past two weeks a string of suspects and "persons of interest" have been named and questioned, only to have each and every one released without charge.

With no leads, investigators on Koh Tao resorted to mass DNA testing of the Surat Thani island's population. From about 300 people, officers identified ten who had been at AC Bar - the last place the British couple was seen - from midnight to 4.30am that fateful night. They also were linked with some forensic evidence, Lt Gen Panya said.

A police source also told the Bangkok Post Wednesday that detectives were looking for three men who shopped at a convenience store near Sairee Beach where the Britons were killed.

Captured on security cameras, the trio bought one item later found discarded. The source said DNA recovered from that package matched that found at the crime scene. 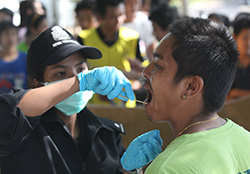 Southern police forensics officers collect DNA from Thai and Myanmar nationals working in restaurants and beach resorts on Koh Tao Sept 23. With no leads, police resorted to mass DNA testing to identify suspects in the killing of two British backpackers there Sept 15.

Lt Gen Panya said all ten people short-listed have been under surveillance and will soon be interrogated, some for the second time. The new round of questioning will determine who the culprits were, he vowed.

"We are confident that within two or three days an arrest warrant can be issued or a wrong-doer arrested," Lt Gen Panya said, adding that the list of ten contained both Thais and Myanmar nationals.

"We have confidence in the forensic evidence that points to the wrong-doers, but we must be careful" and investigate thoroughly, he said.

As national police closed in on the perpetrators of the murders, local authorities continued work to shore up safety on the island infamous for parties, excessive drinking, drug use and crimes against tourists.

Pol Col Apichart Boonsriroj, deputy chief of Surat Thani police, said that he wants to see a police substation opened on the island - the closest station is on neighbouring Koh Phangan - and would deploy more officers and volunteers to ensure safety and restore tourist confidence.

Currently the island has only a police "booth" staffed by two officers. He urged local business owners and residents to contribute funds to build the station.

Vannee Thaipanich, president of the Koh Phangan Tourism Association, said the murders on Koh Tao have affected deeply bookings for the Oct 8 full moon party on that island, with 30% of rooms remaining unbooked. Normally, hotels are booked solid for the party, she said.

Full-moon revellers usually arrived five or six days in advance and visit Koh Tao for scuba diving. The fallout from the killings is evident, she said.

Ms Vannee said she hoped confidence would be restored in time for high season and the New Year's holidays.