The commander of the 1st Division, King's Guard - dubbed the "coup division" - handed over command to his successor on Thursday, and both of them confirmed the national interest is their first priority. 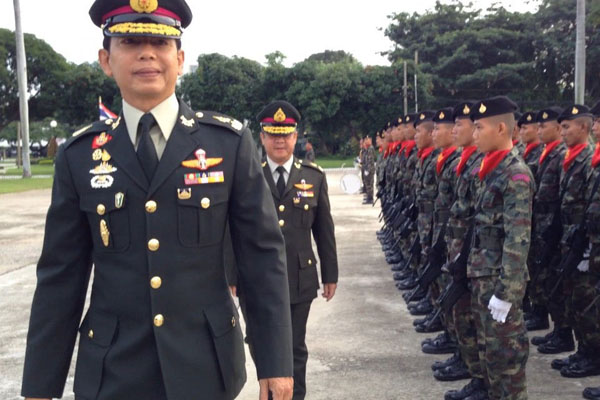 The were both members of  Class 20 of the Armed Forces Academies Preparatory School.

Maj Gen Apirat has been promoted to deputy commander of the 1st Army and becomes a candidate for 1st Army commander in the future.

Maj Gen Apirat took over the 1st Division, King's Guard, in April this year during the political turbulence.

Prime Minister Prayut Chan-o-cha was at that time the army chief and placed Maj Gen Apirat in direct command of the military force that backed the coup on May 22.

In peaceful times, the forces were his teachers, who gave him advice, and in crises they were companions who would protect one another with their lives, Maj Gen Apirat said.

Maj Gen Pongsawasdi, the new commander of the 1st Division, King's Guard, said he was a professional soldier and loyal to the division, the 1st Army, the Royal Thai Army and the nation.

The 1st Division, King's Guard, is an important force within the 1st Army. It is dubbed the "coup division" and incorporates infantry, cavalry and artillery forces. Its commander must earn great trust from the RTA commander-in-chief because he controls "coup personnel".