A group representing Myanmar workers has called for an independent review of the police investigation that led to the arrest of two Myanmar men for the murders of two British tourists on Koh Tao. 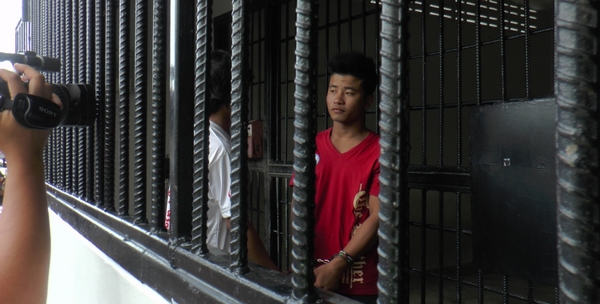 A cameraman films the two murder suspects behind bars at the detention centre on Koh Samui on Saturday. (Photo: Supapong Chaolan)

The Myanmar Migrant Labour Association said there were allegations that Thai police tortured three Myanmar nationals during questioning last weekend about the case, veteran Thailand-based journalist Andrew Drummond has reported on his website.

The claims emerged as police began laying the groundwork to formally charge the two suspects Win and Zaw, both 21. The charges, expected within seven days or sooner, would include aggravated rape and murder which carry the death penalty.

Police on Saturday sought an order from the Samui Provincial Court to detain the pair for a further 12 days, as the initial 48-hour detention period was expiring.

The two exhausted-looking Myanmar natives were escorted by 10 officers on an express boat to Koh Samui on Saturday.

Zaw told reporters that he had been on Koh Tao for three years and last worked at a pub while Win had been working at a restaurant there for two years.

Meanwhile, questions have emerged about how the information that led to the arrests was obtained.

A statement detailing beatings and the use of scalding water was sent to the Myanmar and British embassies. Mr Drummond said it had been confirmed that Mark Kent, the British ambassador, had seen the statement.

Police said that Win and Zaw had confessed to raping Hannah Witheridge, 23, and bludgeoning her and David Miller, 24 to death early on Sept 15. The pair were taken to stage a re-enactment of the crime on the beach of the tourist island on Friday.

A third Myanmar national identified as Mao, who is said to have witnessed the crime, has fled Koh Tao and is still being sought.

Police said they had conclusive proof that DNA found on Witheridge matched that of the two men arrested.

However, Aung Kyaw, a spokesman for the Myanmar Migrant Labour Association, told Mr Drummond: "We do not believe these two men are guilty.

"We have asked the Myanmar embassy to call for an independent inquiry and that the DNA testing be verified independently of the Thai police.

"There are things that have happened on that island which need to be answered including the beatings and torture of Burmese."

The statement delivered to the UK and Myanmar embassies claims that police came upon nine migrant workers playing takraw on Sept 27. Six of them were rounded up but Win, Zaw and Mao escaped into the jungle.

Three of the six were physically beaten and their bodies scalded with hot water as police attempted to obtain information about the three people who had fled. All six were then released. Pictures of the three injured men were sent to the Myanmar embassy.

Police expect to be able to send the case to the prosecutor in Samui on Monday, said Pol Col Prachum Ruangthong, chief of Phangan police station.

They would likely be charged with aggravated rape, murder, night-time robbery and illegal entry, the first two of which carry a maximum penalty of execution.

Apichart Boonsriroj, the Surat Thani police chief, said the cases would be ready within seven days.

Witnesses and evidence at hand are adequate to prosecute the pair without the need to find more, he said.

The investigation indicated they were the only perpetrators responsible for the crime, he added.

"We insist yet again they are not scapegoats. I personally joined the investigation and the DNA test results matched. Circumstantial evidence also pointed to them," Pol Maj Gen Apichart said.

Sceptical British media and others have raised other questions about the investigation, which has featured numerous false leads and missteps.

Chief among them: How did Witheridge's mobile phone end up in the residence of one of the accused, where police said they found it, when in fact her friend had given it to police the day after the murders?

As well, rights groups have voiced concern over the lack of legal representation for the arrested men.

"The suspects have been kept without legal representation. We still don't have lawyers observing the process directly," Pornpen Khongkachonkiet, a human rights activist, told Reuters.

"So we are suspicious about the judicial process in terms of these alleged confessions."