Pictures of slain tourists David Miller and Hannah Witheridge are displayed at a memorial site on Koh Tao.

SURAT THANI — Police have been given until Thursday to submit additional information to prosecutors who will decide whether to indict two suspects from Myanmar for the murders of two British tourists. 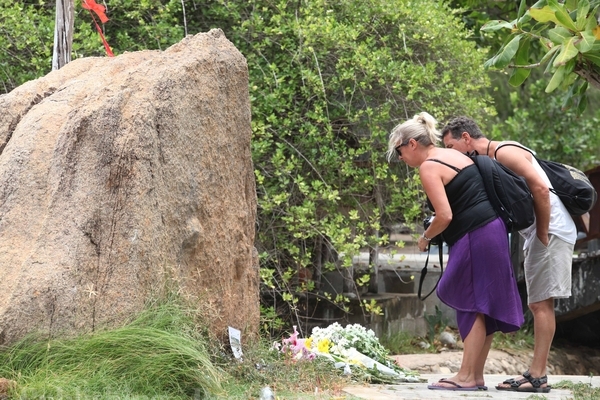 Two tourists examine a memorial set up near the spot where the bodies of murdered British travellers Hannah Witheridge and David Miller were found on Koh Tao. (Photo by Thiti Wannamontha)

Tawatchai Siengjaew, who is in charge of the case, said the police report still had some holes in it. The Region 8 State Prosecution Office ordered the police on Thursday to substantiate their report with more evidence.

Mr Tawatchai did not elaborate on what shortcomings prosecutors had found in the 300-page police report. He denied that they had thrown it out, saying only that the report was not complete.

Police have pressed murder and rape charges against Zaw Lin and Win Zaw Htun in connection with the killings of Hannah Witheridge, 23, and David Miller, 24. The two undocumented workers from Rakhine state in Myanmar are being detained on neighbouring Koh Samui.

The bodies of the two British tourists were found on the southern tourist island of Koh Tao on the morning of Sept 15. The subsequent police investigation has been heavily criticised. The crime scene was compromised, DNA testing mishandled, theories and identities of possible suspects changed daily before investigators settled on the two labourers, who reportedly confessed but have since recanted.

The police investigation has been so badly handled that most members of the public in Thailand and abroad believe the real killer of Miller and Witheridge is still at large. However, senior police officers have vehemently rejected allegations that the two men in custody are scapegoats.

Mr Tawatchai said the detention of the two suspects would be extended for another 12 days after the expiry on Wednesday of the current term, regardless of what additional information is submitted to prosecutors, who will not delay the process.

"Prosecutors will promptly consider the report once it is complete and make the decision on the indictment," he said.

Zaw Lin and Win Zaw Htun reportedly have reversed their account of the events of Sept 15 and claimed they were tortured into confessing.

Pol Col Prachum Ruengthong, the Phangan police chief, said the suspects could claim what they wanted, but his men were confident of the evidence they had collected before the arrests were made on Oct 2.

"The suspects can say anything because they have the basic right to do so," he said. "Whether they confessed or denied the charges will not affect the evidence collected by police to send to prosecutors for indictments."

In any case, he said, the suspects' confessions could result in more lenient treatment if and when it comes to sentencing in court.

The case was even raised in talks between Prime Minister Prayut Chan-o-cha and President Thein Sein in Nay Pyi Taw on Thursday as the Myanmar president asked for a "clean and fair" investigation.

Gen Prayut said on Friday that his counterpart understood the handling of the murders by authorities, urged the Thai media to end its criticism, and reiterated the two suspects were not scapegoats.

In England, meanwhile, family and friends staged a party funeral on Friday to bid farewell to Hannah Witheridge.

The service in her home village of Hemsby in Norfolk in eastern England, was marked by bright colours, cheering and applause.

The 23-year-old's parents had asked people to dress brightly for what they called "Hannah's Party", rather than grieve over her killing.

The village church was packed and around 50 people listened to the service outside on speakers, while local people lined the funeral cortege route to pay their respects.

Earlier this week, the Witheridge family paid tribute to Hannah, saying she would be "sorely missed by all who knew her".

They added: "She was dedicated, ambitious and would have made an amazing difference to the lives of many families through her chosen career as a speech and language therapist.

"As a family we hope that the right people are found and brought to justice."