New armed forces commanders have pledged their allegiance to the government and the National Council for Peace and Order under the helm of Prime Minister Prayut Chan-o-cha. 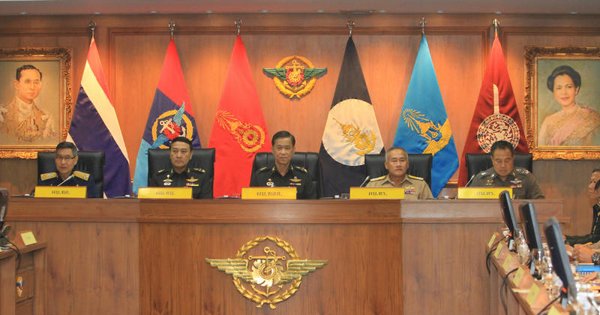 Loyalty oaths, usually sworn to the nation, the flag and the monarch, were taken on Monday by the incoming heads of security forces - to coup leader Gen Prayut Chan-o-cha, his government and his National Council for Peace and Order (NCPO). (Photo by Tawatchai Khemgumnerd)

Supreme Commander Worapong Sanga-net Monday led the military top brass and the national police chief to announce their stance after chairing the first meeting of the new armed forces chiefs.

"We not only give our support and encouragement to the prime minister, but we will also translate his orders into actions. We will do our best," Gen Worapong said.

Gen Worapong said all sectors of society, not only the armed forces, have to perform their duties to their fullest capacity.

"The armed forces are not on the top [of the power structure], but in the middle. Thus, deputy prime ministers and cabinet ministers have to work together to achieve the goal of a general election. Hundreds of jigsaws pieces will not give the picture we want if placed improperly,'' said Gen Worapong.

The government's reform plan covers 11 areas and if these come to fruit he believed there would be no more coups in the future, the supreme commander said.

He brushed aside sources of resistance against the NCPO and the government, saying they came from only a small number of people.

Asked about the large turn out of red-shirt members at the cremation ceremony of ex-deputy House speaker and former core red-shirt member Apiwan Wiriyachai at Wat Bang Phai in Nonthaburi on Sunday, Gen Worapong said the large crowd was expected as many people knew Col Apiwan.