Couple to be charged with murdering Japanese man
Thailand
General

Couple to be charged with murdering Japanese man

Police plan to charge a Samut Prakan province couple with the premeditated murder of a 79-year-old Japanese man missing since Sept 21.

Pol Lt Gen Ruangsak Jaritek, acting assistant national police chief, said on Wednesday investigators are waiting for DNA tests of remains found in a canal before wrapping up the case and pressing charges against Pornchanok Chaiyapa and her husband, Somchai Kaewbangyang.

The evidence was sent to the Institute of Forensic Science at Police General Hospital for tests.

The couple could be charged with killing Yoshinori Shimato, chopping up his body and dropping the remains into Khlong Nang Thim in Bang Bo district of Samut Prakan province.

Both suspects confessed to the murder and Srivara Rangsipramanakul, acting commissioner of the Metropolitan Police Bureau, said divers Monday found bags of remains as described in Mr Somchai's confession.

The acting commissioner quoted the taxi driver as admitting that on Sept 21 he and his wife - who had been Shimato's occasional companion -- had taken Shimato to Bang Na 2 Hospital in Bang Sao Thong district before taking him to their house in the Orchid Villa housing estate in the same district.

Pol Maj Gen Srivara said later Wednesday that the couple had dismembered the victim in a second-floor toilet of their house in the Orchid Villa housing estate. They killed him to get his money.

The body was placed in four bags with sand and sunk in the canal. Divers found two bags on Monday night.

At about 1pm Wednesday, divers found another bag containing human organs at the same location, near a bridge across the Khlong Nang Thim canal by Assumption University's Bang Na campus off Bang Na-Trat Road.

Mr Shimato was the second elderly Japanese man to die during a relationship with Mrs Pornchanok. She previously was married to another Japanese man who died in 2003 after falling down some stairs.

Mrs Pornchanok has been known under three different names during the past decade and also had an outstanding arrest warrant on fraud charges.

Tetsuo Shimato, son of the elderly Japanese man, met senior Thai police later on Wednesday to express his gratitude for the quick investigation into the case.

He said it was hard for him to accept the loss of his father but he still had positive feelings towards Thai people in general as his father had told him that Thailand was beautiful and that he wanted to spend the latter part of his life here. 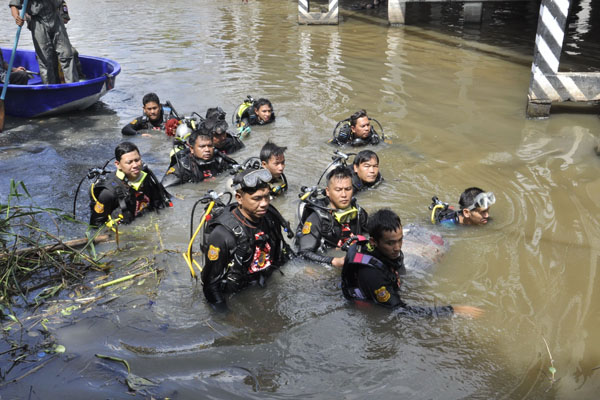