Tun Tun Htike (left) and his wife Zaw Aye Maung talk with reporters after visiting their son Win Zaw Htun at the Samui prison on Friday. (Photo by Supapong Chaolan)

SURAT THANI — Relatives on Friday met with the two Myanmar suspects in the Koh Tao tourist murders for the first time since their arrest three weeks ago. 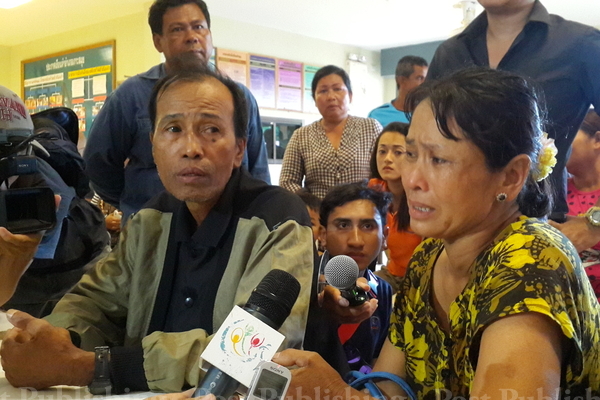 Tun Tun Htike (left) and his wife Zaw Aye Maung talk with reporters after visiting their son Win Zaw Htun at the Samui prison on Friday. (Photo by Supapong Chaolan)

Afterward, they gave vivid accounts of violent death threats that the suspects claimed police made to force confessions to crimes that they now deny.

Tun Tun Htike and his wife Zaw Aye Maung, the parents of Win Zaw Htun, and Phu Shwe Nu and Thien Shwe Aug, the mother and uncle of Zaw Lin, visited the men for more than two hours at the prison on Koh Samui in Surat Thani province.

Nine people accompanying them to the prison included representatives of the Myanmar embassy, the National Human Rights Commission of Thailand and Lawyers Council of Thailand.

The two migrant workers are charged with killing Hannah Witheridge, 23, and David Miller, 24, whose bodies were found on Sai Ree beach on Koh Tao on Sept 15. They are also charged with raping Withderidge.

Tun Tun Htike said after the meeting that his son confirmed in tears that he was innocent and that police had tortured him to confess that he and Zaw Lin had killed the two British tourists.

"I hope for justice from the Thai judicial process for my son,” he said.

Tun Tun Htike gave more shocking details of the meeting with his son in an exclusive interview with DVB.

"The interrogators told them to confess to the crime, and threatened to cut off their limbs, put them in a bag and dump them in a river if they did not,'' DVB quoted him as saying.

"The police also threatened to tie the two boys to a tyre, pour petrol on it, and set it alight," the father said. "My son said they were terrified and confessed. But now that we [their parents and Myanmar officials] are present, they can speak the truth — that they did not commit the murder.

"My son also told me that the police threatened to use tasers on them."

The parents and those accompanying them later lodged a complaint in writing with the Office of the Attorney-General through the office in Samui district. The evidence includes letters signed by the two suspects, their mothers, and the lawyers for the embassy and council.

Theerawut Prammahant, deputy chief of the Samui state prosecution office, said authorities there would forward it to the head office in Bangkok as soon as possible.

He said public prosecutors would look at all the evidence in the interest of fairness to both police and defendants.

The relatives arrived in Bangkok on Wednesday and travelled to Koh Samui on Thursday evening.

The two suspects, aged 21, from Rakhine state were arrested on Oct 2. Police have said they have DNA evidence that links the pair to the crimes. However, prosecutors who examined the 300-page investigative report said they needed more detail before they could decide whether the case could proceed.

The two suspects formally withdrew their confessions on Tuesday when they met two lawyers from the Lawyers Council at the prison.

The council on Wednesday called for state prosecutors not to rush to make a decision on an indictment until they had evidence claimed by the suspects to counter the police allegations.

Deputy Prime Minister Prawit Wongsuwon said it was normal for suspects to recant confessions but in this case he did not expect any problem because authorities were handling it in compliance with the law.

The police investigation into the Koh Tao killings has been widely criticised at home and abroad. The original crime scene was trampled, numerous people were named as possible suspects, and nearly 300 people made to take DNA tests.

However, the speed with which the DNA tests on the suspects were completed, compared with those on other people, has led to calls for the tests to be independently checked.

The British government became sufficiently concerned that it asked to help with the case. A team of British police officers is expected to arrive in Thailand this coming week but local authorities say they will be here only as observers.