The United States confirmed on Saturday that a "scaled-down" version of the annual Cobra Gold military exercises in Thailand would go ahead next year. 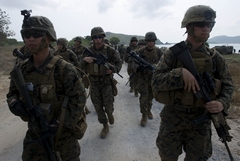 US marines participate in an amphibious assault military drill during Cobra Gold 2014 in February at the Royal Thai navy base at Sattahip in Chon Buri. (AFP Photo)

There had been reports earlier that Washington had been considering moving the drills — the largest multilateral military exercise in Asia Pacific — outside the kingdom in response to the May 22 coup.

Washington suspended $4.7 million in security-related aid to Thailand, roughly half of its annual assistance to the longtime ally, after the military seized power.

In June the United States said it was also considering moving Cobra Gold 2015 outside of Thailand.

But on Saturday a US Embassy spokeswoman confirmed the annual war games would go ahead.

"We are proceeding with a refocused and scaled-down Cobra Gold 2015 exercise. ... In light of the current political situation, the US government has increased its focus on non-lethal activities, such as humanitarian assistance and disaster relief," she said.

The drills bring together thousands of troops from the US, Thailand and other countries for field training, with the 2014 exercises held in February drawing some 13,000 participants.

The spokeswoman added that military aid to Thailand will remain suspended "until a democratically elected government takes office".

The United States and Thailand have held the joint Cobra Gold exercises since 1980.

In recent years it has become a key element of a US strategy to "pivot" power to Asia amid concerns by several countries over China's rise.