The Thai partner of Pornchanok Chaiyapa, the chief suspect in the brutal murder of her elderly Japanese husband, says he is guilty of suffocating her previous Japanese husband in a case that cast a "dark secret" over the family for 11 years. 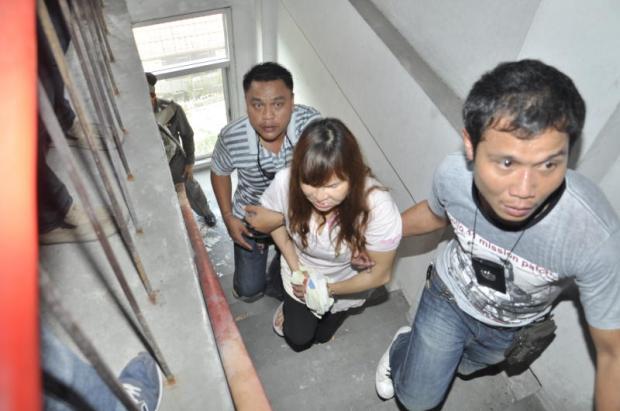 Officers escort Pornchanok Chaiyapa, who is charged with the murder of her former Japanese husband 11 years ago, during a re-enactment of the crime yesterday.

Somchai Kaewbangyang, who has allegedly confessed to colluding with Ms Pornchanok, 47, in last month's murder of teacher Yoshinori Shimato, 79, admitted he killed the woman's previous Japanese partner, Kasitosi Tanaka in 2003.

Mr Somchai, who has two daughters with Ms Pornchanok, said he had successfully disguised Tanaka's death as an accident. The official cause of death is that he had suffered a heart attack after a fall.

The latest confession came just two days after one of Tanaka's daughters, Keiko Matta, 31, lodged a complaint with police seeking to reopen the investigation into her father's death. She never believed it was an accident as Ms Pornchanok and Mr Somchai had claimed. 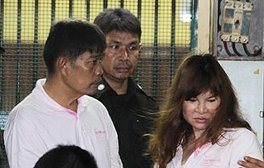 Mr Somchai re-enacted the crime at a shophouse in Samut Prakan's Bang Phli district. He said he pushed Tanaka, 57, down a staircase and suffocated him.

Mr Somchai said before the murder, Ms Pornchanok phoned Tanaka to return to the shophouse where the Japanese man sold agricultural equipment. A party was under way at which two other men were present — Somsak Saelim, who is Mr Somchai's younger brother, and Wichai Saelim, his late father.

Mr Somchai said he did not show up at the party, but hid in a room on the third floor.

After the party, Ms Pornchanok went to her bedroom on the fourth floor with Tanaka while Mr Somsak and Wichai slept on the mezzanine floor.

Mr Somchai remained in hiding and waited for Tanaka to go to the toilet on the third floor. When he came downstairs, Mr Somchai said he hooked Tanaka's leg and pushed him down the staircase. He then smothered him by pressing one foot on the victim's neck after locking his head between two metal bars of the staircase for about 10-15 minutes.

Mr Somchai then alerted Ms Pornchanok and his brother and father about what he claimed was an accidental fall.

Ms Pornchanok, who was the first to arrive, reported to the police that there had been an accident, said Mr Somchai, who left the house before Ms Pornchanok alerted police. Mr Somchai said he acted out of jealousy. He also confessed he hoped to take over Tanaka's business after his death.

The brother, Mr Somsak, 32, who was also taken by police investigators to the re-enactment, said he told police Mr Somchai was not at the house that night and that Tanaka fell down on his own. He said he lied because Ms Pornchanok forced him to do so. Mr Somsak and his late father worked for Tanaka at the time.

After the party ended about 8pm, Mr Somsak said, he was asleep when his father woke him to go check on what he described as someone calling for help.

When he went upstairs he found Tanaka lying on the floor with Mr Somchai and Ms Pornchanok already there.

"Over the years I've been living unhappily with this dark secret of the Japanese man's death. I've tried to make merit at several temples just to make me feel better, but it didn't work at all," Mr Somsak said.

During the re-enactment, Ms Pornchanok collapsed. But a police source said she returned to normal after officers took her away in a van.

Police then sought arrest warrants for Mr Somchai and Ms Pornchanok and charged them with premeditated murder, he said.

Ms Keiko said she was glad to learn the details of her father's dubious death. She said she could not believe it was an accident, but was happy that it was now resolved. She thanked the police officers.

The latest confession comes after the couple's involvement in the case of Shimato, who had been missing since Sept 21. His dismembered body was found on Wednesday stuffed into four sacks that were dumped in a canal in Samut Prakan.

Ms Pornchanok, who was formerly known as Pensri, has had at least two more Japanese partners, said a police source. One was identified only as Kamakari, said the source, adding that Ms Pornchanok's neighbour had obtained a letter written by him to Ms Pornchanok complaining about her going away with three million baht of his money. The neighbour received the letter for Ms Pornchanok because she was never at home.

The other Japanese partner was identified as businessman Noboru Ichizawa, who has filed embezzlement charges against Ms Pornchanok with the Thong Lor Police Station.

Police are working to establish connections between the crimes.