Tired of the never-ending problem of drug dealing in prisons, Justice Minister Gen Paiboon Koomchaya has branded state prisons under the Department of Corrections “centres of evil” and given the agency chief a six-month ultimatum to solve the matter or get someone else who can.

"I am not sure if the Department of Corrections has a duty to rehabilitate [inmates] or be a centre of evil because the department's administration in the past four or five months has been a failure," Gen Paiboon told ministry officials on Monday. 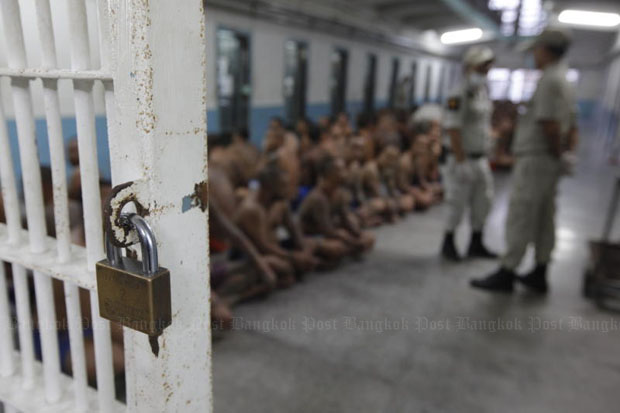 Guards at Klong Prem Central Prison search cells for drugs and other contraband. Justice Minister Gen Paiboon Koomchaya has given the Department of Corrections six months to clean up Thailand’s prisons or he will transfer its director. (Bangkok Post photo)

"From now on I will enact decisive measures, as prisons have limited space but there are still cases of drugs and mobile phones being smuggled into them."

The minister slammed the agency while addressing senior officials on five urgent policies to be implemented. They include fairly providing justice to people, rehabilitating offenders, suppressing drugs, eliminating corruption and preventing special crimes.

Gen Paiboon said the corrections department was plagued with problems and he was considering moving the agency to be under the Ministry of Interior's supervision.

Regarding solving drug problems in prisons, Gen Paiboon said the National Council for Peace and Order has supported the department with all necessary resources, including law enforcement, but it has failed to resolve the matter even after imposing many new rules and regulations. 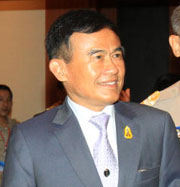 He attributed the failure to the performance of individuals rather than the system, and, as a result, the transfer of senior officials was needed to allow more-competent individuals to take on anti-drugs battle.

Gen Paiboon said 60% of drug problems involved drug-dealing networks inside prisons. He gave Corrections Department director-general Witthaya Suriyawong six months to eliminate drug trading in prisons or face transfer. He did not elaborate to what position he would transfer him to.

He also pledged to punish and transfer any prison warden if police found drugs they seized from offenders had been supplied by inmates.

Gen Paiboon also threatened to transfer Surat Thani Central Prison chief Somjit Sanyawutthi if he failed to get rid of "mafia inmates" at his facility and protect his subordinates.

The justice minister was referring to the death of Charnchai Narmjak, 40, head of the prison's administration department, who was killed in a drive-by shooting in Muang district of Surat Thani on Oct 13.

Police said Charnchai had a crucial role in trying to make his prison drug-free and his outstanding performance for screening illegal items and being honest likely upset drug gang members and led to his murder.

Gen Paiboon said he previously had instructed the corrections department to relocate all "influential inmates" from sub-prisons to high-security facilities but the "system had problems."

"The Surat Thani prison proposed the transfer of inmates who had most influence on other inmates and guards to a high-security prison, but their names were taken off the list at the corrections department. And then the prison staff was shot dead.

"I will certainly set up a committee to probe into whoever involved in this. For the Surat Thani prison chief, if you can't handle this, you will surely be transferred, so you better start packing your stuff today," the general said.