Helped by the lowest taxi fares in Asia, Bangkok has been ranked as the 11th most-affordable city for urban transit by travel-search website GoEuro.

The Berlin company, which runs an trip-planning search tool for European journeys, ranked 60 major cities around the world based on prices of a 10-kilometre trip using taxis, public transit and the Uber ride-sharing service. 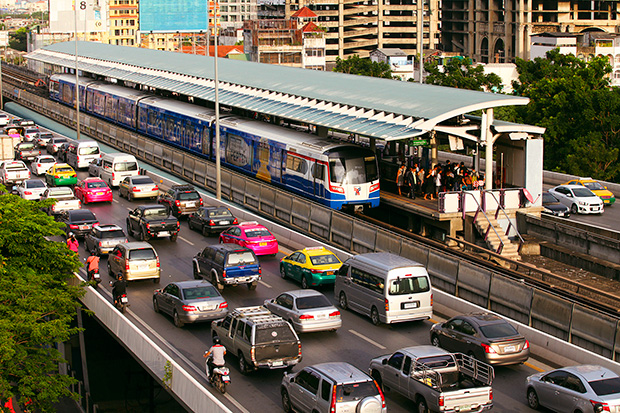 Bangkok’s BTS and public mass-transit may be only average when it comes to cost, but its low taxi and Uber rates helped the city rank 11th on a survey of the most-affordable metropolises for urban transit. (photo by Patipat Janthong)

Its Urban Transit Price Index shows Bangkok has the third-lowest average taxi fares and sixth-most affordable Uber rates. But prices for the city's BTS and MRT train services landed the capital in 29th place for mass-transit affordability. The result was an overall ranking of 11th.

"Information about the cost of getting to and from the airport, train or bus station to a hotel is essential, especially when on a budget," GoEuro said in a statement. "As disruptive technologies like Uber and ride-sharing become more common, travellers have more options than ever before.  Understanding the price and how it may vary from city to city is a valuable resource for the business and holiday traveller."

In all, six Asian cities were among the top 10 most-affordable. Two were in India and two in Latin America.

The most expensive city for urban transport overall was Stockholm, Sweden, where public-transport costs $4.96 per ride; a taxi journey $40.04 per 10km; and an Uber journey $48.57 per 10km.

The cheapest city for transport overall was New Delhi, India, where an average public transport ticket cost $0.22 per ride; a taxi journey $2.62 per 10km; and an Uber journey $4.40 per 10km.