The army is preparing to arm new defence volunteers with 2,700 rifles to strengthen security operations in the far South, which has been recently bombarded by a new string of deadly attacks. 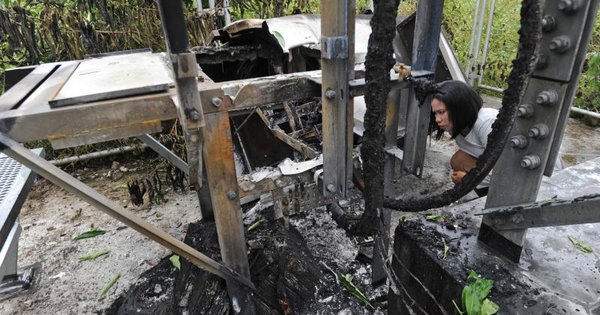 On Sunday, insurgents burnt a number of cellphone towers in Narathiwat province. The defence ministry is rushing a plan to distribute 2,700 rifles to villagers to try to protect themselves. (Reuters photo)

Under the plan, firmed up Monday in a meeting chaired by Deputy Prime Minister and Defence Minister Prawit Wongsuwon, the army will acquire the weapons for the Interior Ministry to distribute to the defence volunteers, said Col Banphot Poolpian, spokesman of the Internal Security Operations Command (Isoc).

The move to add teeth to the defence volunteers — squads of local residents who volunteer for security details — came as two more people were killed and three others, including a kamnan in Pattani, were injured in another attack Monday evening.

The arms purchase was among several issues raised at Monday's meeting of members of a new committee responsible for implementing security policies in the southernmost provinces.

The committee also approved 7.7 billion baht to finance efforts to solve the southern unrest during next year's first quarter, with plans to boost the region's economy a top priority, Gen Prawit said.

But he said military approaches will remain crucial, and the help from defence volunteers is a major part of them. The Territorial Defence Volunteers Administration Bureau is overseen by the Interior Ministry.

The bureau recruits villagers for security missions on a voluntary basis. Their role is to support the military and police officers.

The recent spate of shootings, bombings and arson attacks in Pattani, Songkhla and Narathiwat between Friday and Monday have prompted a more urgent response from Gen Prawit and other senior security officers.

Commenting on the weekend attacks, Gen Prawit said Isoc has been looking into the spike in violence.

Gen Udomdej held an emergency teleconference with officers of Isoc Region 4, which oversees the southern provinces, after the militant attacks, urging them to adopt tighter security measures.

Among them are extra vigilance at checkpoints both in and outside cities at night, greater care for victims of violence and an intensive hunt for insurgents.

Security forces have been searching for several men who fired at a group of villagers in Ban Nong Sarai Moo 8 in Songkhla's Tepha district on Saturday night. 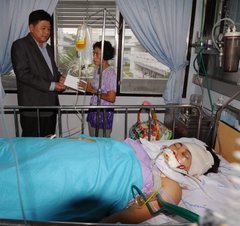 rifle240 A drive-by southern gang shot Suthida Tangjai, 20, in the head for no apparent reason, and medical staff Monday night gave the second-year student at Princess of Naradhiwas University (PNU) only a small chance of survival. (Photo by Weadao Harai)

Three men were killed and seven people, including a girl, were wounded in the attack, which occurred one day after deadly bomb blasts at four karaoke restaurants in Pattani's Muang district and arson attacks on five cellular signal towers in Narathiwat.

According to an intelligence official, investigators believe insurgents behind the attack in Tepha work for three suspected militant leaders — Rutsalan Baima, Chamroen Umasa and Seri Waemamu, all of whom are wanted on arrest warrants.

The three are believed to be active in Songkhla's Tepha district and Pattani's Khok Pho district.

In the Tepha case, it was believed there were as many as six people involved in the shooting. Two of them kept a lookout for security officers, while the other four fired M16 assault rifles into the crowd, the official said.

Investigators who examined spent bullet shells at the scene linked some to a previous deadly attack in which a militant killed three villagers in Ban Bang Khao in Pattani's Nong Chick district in 2011, the official added.

Asked whether this string of violent incidents would affect peace talks with the Barisan Revolusi Nasional, which have been on hold since late last year, Gen Prawit said the government still wants to go ahead with plans to resume the dialogue.

Monday evening, a drive-by attack took place when a gunman in a pickup truck opened fire at five people travelling in another vehicle on the Pattani-Narathiwat road in Pattani, police said. Two victims who were yet to be identified were killed and three others, including Waedao Chetae, kamnan of Khlong Maning in Pattani's Muang district, were injured.

And on Sunday, gunmen killed one woman and injured four other people, including a border patrol officer and a university student, in two separate attacks in Narathiwat.

Suthida Tangjai, 20, of the Princess of Naradhiwas University, was seriously wounded in a drive-by attack in Muang district while Somporn Pothipoch, 40, was gunned down, police said.

Monday was also the first day back at school in southernmost provinces since six schools in Pattani's Thung Yang Daeng and Mayo districts which were set on fire in early October.

Amid tight security, students returned to class in tents erected as temporary classrooms.