A gambler accused of shooting dead two people and wounding 10 others after losing a lot of money playing dice at a village in Khon Kaen province on Sunday night turned himself in to police on Tuesday. 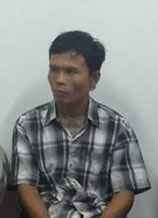 Sam Phetnok confessed to opening fire with an assaujlt rifle at a group of gamblers, killing two and wounding 10 others, in Khon Kaen province on Sunday night, according to police.

Sam Phetnok, 32, of Kranuan district, confessed he opened fire at a group of gamblers playing high-low in a fit of anger because the operator of the game had insulted him, police said.

Two people, including the game's operator, were killed and 10 other gamblers wounded in the attack late Sunday night at a house owned by a person identified only as Mrs Lom in tambon Nong Ko, Kranuan district,

Mr Sam allegedly told police the dice operator kept accusing him of being a police informant and using rude, insulting  words while he was trying his luck at the dice game.

After losing tens of thousands of baht in the game, he went home on his motorcycle and unearthed an assault rifle he had hidden in the ground.

He then return to the gambling den and opened fire on the dice thrower and the crowd, before fleeing and hiding among crops in fields at a nearby community.

He said he had eaten long beans and sugarcane since then. He was  feeloing exhausted and so he went to see his father Thongpoon Phetnok, who persuaded him to surrender.

Mr Sam claimed he bought the assault rifle from a friend to shoot dogs that were attacking his fighting cocks.

Police charged the suspect with murder, illegal possession of a firearm and carrying it in public without permission.

He confessed to all charges, according to police.