Anyone wondering why Bangkok traffic is so bad only needs to look at how many cars are registered in the capital.

With two months still left in the calendar year, the total number of vehicles with Bangkok licence plates registered with the Land Transport Department already has hit about 8.55 million, double the 4.28 million registered in all of 2004, Deputy Transport Minister Arkhom Termpittayaprisith said Tuesday.

Passengers cars are the most-popular vehicles on the street, followed by vans, pickups and other trucks, he added.

However, the rapid increase in vehicles may be slowing. Every day this year, 1,263 owners registered their vehicles compared with 1,954 vehicles a day last year, he noted. 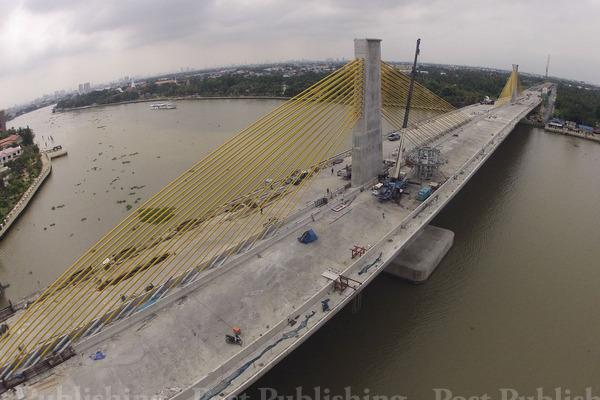 A new bridge across the Chao Phraya River in Muang district in Nonthaburi province will be completed this year. The Transport Ministry plans to build ten more in the future. (Photo by Pattarapong Chatpattarasill)

The biggest factor fuelling the increase, he said, was the first-time car buyer tax credit offered by the Yingluck Shinawatra government.

Ms Yingluck and her Pheu Thai Party launched the scheme in 2011 for first-time buyers to receive tax rebates of up to 100,000 baht on passenger cars with engine capacities of no more than 1,500cc, or pickup trucks with any engine capacity, but a price capped at 1 million baht.

The Transport Ministry is figuring out solve traffic problems for drivers travelling from the western side of the Chao Phraya River in Thon Buri and neighbouring provinces to downtown Bangkok.

Mr Arkhom said the ministry will seek a budget of 50.5 billion baht from Prime Minister Prayut Chan-o-cha to build ten new bridges across the river in the next three years.

The planned contraction includes five bridges in Bangkok, two bridges in Pathum Thani province, two in Nonthaburi and one in Samut Prakan.

Construction on nine of the ten could start in 2017 and would take four years to complete, pending cabinet approval. Construction of the last bridge could begin in 2022 and finish in 2031.