Thailand, Myanmar, Laos and China have pledged to join forces to fight drug trafficking along the Mekong River, where officials estimate they are failing to intercept 80% of smuggled narcotics. 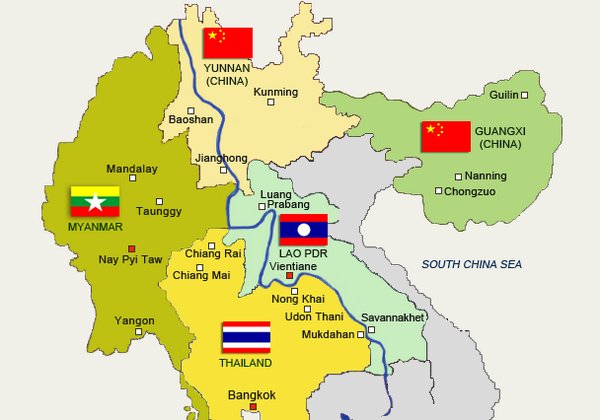 Myanmar, Laos and Thailand are the three countries of the Golden Triangle. Almost all illicit drugs now are produced in Myanmar, with China added as an important "export market" for the traffickers.

Permpong Chaowalit, secretary-general of the Office of the Narcotics Control Board, said the initiative would be a significant step toward tackling drug smuggling along the transnational river, which has become a major channel for traffickers.

He said the anti-drug mission is expected to start next month, with each country helping to police sections of the river. Countries have also agreed to set operational plans for monitoring criminal activities on the river.

"Each country will set their own plans and identify operational target areas. But they will coordinate the wider drug suppression drive with other countries," Mr Permpong said.

He said attempts to curb drug trading along the Mekong have been hampered by the fact traffickers use riverside areas occupied by armed groups as transit points for their illicit substances.

Among them are areas controlled by the Wa and Kokang ethnic groups in Myanmar's Shan State.

He had asked Thet Naing Win, the Myanmar minister for border affairs, to crack down on drug production sites and transit areas. 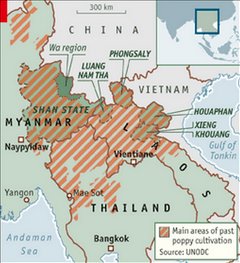 The Golden Triangle got its name and reputation from this map showing where illicit drugs, almost all heroin, originated in the 1960s and 1970s.

But Mr Permpong admitted this would be an uphill task for the country, because Nay Pyi Taw will struggle to launch operations in areas controlled by rebel groups.

"So far the authorities are only managing to seize about 20% of drugs smuggled through the Mekong," he said. "This is why all four nations must cooperate more closely to solve the problem."

He said the joint project will help stop traffickers working across all four countries. In northern Thailand, he said smugglers often carry drugs along the river in Chiang Rai province, through the remote districts of Chiang Saen and Chiang Khong. Other key smuggling routes come into the country through northeastern provinces.

Mr Permpong said he has given Myanmar officials Thai arrest warrants for 10 drug suspects, including Lt Col Yi Se, the leader of an armed Muser group, all thought to be hiding out in the country.

Meanwhile, Myanmar authorities have asked Thailand to support their plans to expand anti-drug trafficking units in the town of Tachilek, which sits across the border from Chiang Rai's Mae Sai district.

Mr Permpong said he will forward their request for necessary equipment, including vehicles, to the Justice Ministry.

PHUKET: A 19-year-old Australian fell to his death from a hotel building in Kathu district on Wednesday evening.

“NEWBrew” is no ordinary beer. The new Singapore blond ale is made with recycled sewage.

LONDON: Dennis Morris was the official Sex Pistols photographer, taking some of the most iconic images of the 1970s punk trailblazers.