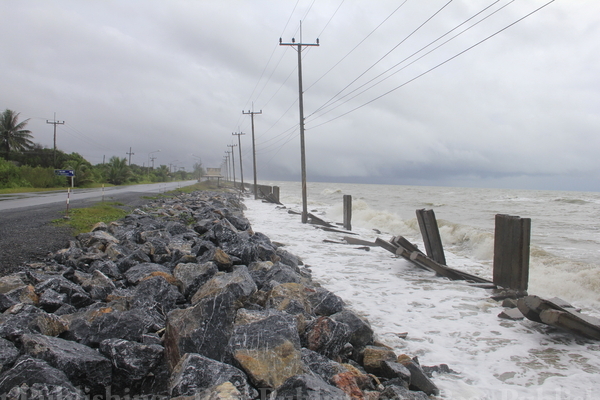 Hours of heavy rain left parts of Muang district under water, forcing local residents to rush to move their belongings to higher floors.

Conditions began to ease after officials and volunteers drained water from some flooded parts of the town, said Chatchai Promlert, the head of the Disaster Prevention and Mitigation Department.

Authorities warned local residents living in at-risk areas to brace for possible forest runoff and mudslides in districts including Lan Saka and Phipun.

Trawlers lie at anchor at a port in Muang district of Songkhla to avoid rough seas and heavy rains in the Gulf of Thailand. (Photo by Wichayan Boonchote)

Pattani was also hard hit, especially in Muang district which recorded the heaviest rainfall in the province, according to the department.

It said 214.9 millimetres of rain fell on the district, prompting officials and volunteers to drain the water to the Pattani River.

Rains and rough seas were reported as well in neighbouring Surat Thani province including Koh Samui and Koh Phangan districts.

Thanakorn Trabunphreuk, chief of the Disaster Prevention and Mitigation Office in the province, urged ferry operators from the mainland to Koh Samui and Koh Phangan to take extreme caution.

Rain was also steady but light in Ranong, Phatthalung, Phuket, Krabi, Trang, Chumphon, Satun and Songkhla but there were no reports of flooding.

Songkhla has banned swimming on Samila beach in Muang district this weekend as strong waves gathered pace in the Gulf of Thailand.

Rough weather conditions forced fishing trawlers to return to the shore for safety in all coastal provinces.

All southern provinces have been placed on full alert until Monday as the low-pressure system moves in over the Gulf of Thailand and the lower South.