Flash floods and runoff hit more than 20 villages in Trang province yesterday, despite rainfall in several other areas of the South subsiding. 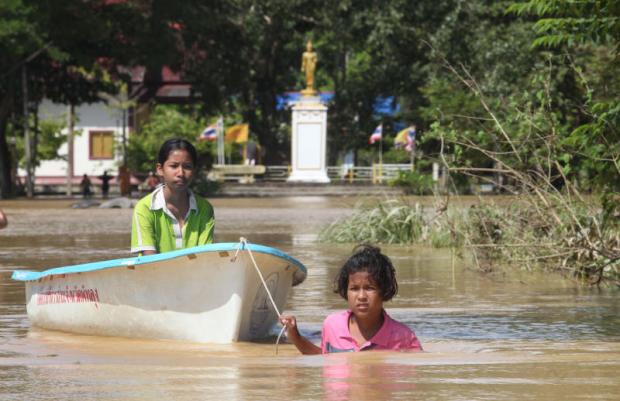 A girl wades through waist-deep flood water near Wat Lo in Phatthalung's Khuan Khanun district, which bore the brunt of downpours in the South. Thiti Wannamontha

Trang is among several southern provinces where floods have hit since a low-pressure system arrived in the region on Saturday.

Hundreds of households in tambon Lam Phula of Huai Yot district were affected after run-off from the Ban That mountains and Nakhon Si Thammarat's Thung Song district hit their neighbourhood in the early hours yesterday.

The most severe scenes were reported in Moo 7 village where floods were over a metre deep, prompting Phraya Ratsadanupradit military camp in Huai Yoi district to launch rescue missions.

Soldiers travelled in boats along flooded areas yesterday to help those trapped in their houses.

The officers also set up a flood relief centre to help residents in the district around the clock.

Trang is located to the south of Nakhon Si Thammarat which was also hit by heavy rainfall over the weekend.

Mr Chetsada said the low-pressure system had moved from the province and was heading for the Andaman Sea.

An initial survey found the rainfall had affected more than 12,000 villagers in the five districts and damaged 2,000 rai of farmland and six roads, he said.

Beside Trang and Nakhon Si Thammarat, other provinces to be hit by heavy rainfall and flash floods due to low pressure were Chumphon, Surat Thani, Phatthalung, Songkhla, Ranong, Phangnga, Phuket and Krabi.

Phirasak Hinmuangkao, Nakhon Si Thammarat governor, said the rain had stopped and the floods were receding.

However, authorities remained on alert and continued their operations to help those affected.

In Pattani, the navy resumed its search for four missing crew members of a fishing boat which capsized 40 kilometres from the shore on Saturday.

The situation would be back to normal in one or two days, authorities said.

However, the department said it was still monitoring the situation.

He expressed concern at the volume of floodwater in Lan Saka district before dawn on Sunday.

Twenty pumps were installed in 17 locations while municipal workers drained floodwater into the sea.

Meanwhile, in Krabi, more than 500 long-tailed boats anchored along the beaches of Koh Phi Phi were warned that a low-pressure area would arrive in the province from the Gulf of Thailand later on Sunday, bringing with it heavy downpours and strong winds.

The boats are used to ferry tourists.