Dual-track trains to get China loan

Beijing to be repaid in Thai rice and rubber

China is to loan Thailand cash to construct three dual-track railways as part of a government-to-government deal to boost regional transport links.

The agreement was made at a full-delegation meeting led by Chinese Premier Li Keqiang and Thai Prime Minister Prayut Chan-o-cha. The meeting followed bilateral talks with Chinese President Xi Jinping on Sunday.

The new tracks will allow better transportation from the Northeast to industrial areas in Rayong and will be a good start in developing links between Thailand, Asean and China, he said. They will accommodate mid-speed trains at first but could eventually be used for high-speed services.

The Chinese government will provide a loan to Thailand to allow the development of the lines. Under the arrangement, Thailand will be able to repay the investment costs to China with rubber and rice. Exact details of the "soft loan" arrangement are yet to be worked out.

"If we don't start construction now, it will prove an obstacle to transport in the future. We have to make a decisive move, otherwise transport development will be delayed and the cost of the project will increase."

Gen Prayut said the government is holding negotiations on plans to develop several rail routes, but the agreement with China is being made under a "transparent" government-to-government deal, without the involvement of private companies.

"A full delegation has discussed it and I can assure people the deal will not have any adverse affect on the country," Gen Prayut said. "A number of countries are interested in developing railway projects in Thailand but not on these routes."

The premier added that the government will make sure there is no graft in the dual-track rail projects with China or any forthcoming transport development, arguing the country has already been damaged enough by corruption.

"We cannot allow corruption to occur in these projects because we've been damaged by such activities for too long. In terms of the contract with China, the government will make everything transparent and follow all related laws," Gen Prayut said.

The majority of planned dual-track railway development in the country is set to involve one-metre wide tracks, to match existing train lines. But one-metre dual tracks can only accommodate trains at speeds of up to 160kph.

The 1.435-metre standard-gauge tracks that China will help develop could serve trains at speeds of up to 250 kph, although feasibility studies must be carried out to confirm this, Gen Prayut said.

"We will proceed with dual-track railways and mid-speed trains at first," he said. "This will be a New Year's present for the Thai people in 2015."

In discussions at the Asia-Pacific Economic Cooperation (Apec) gathering this week, Gen Prayut said Chinese leaders raised the issue of reviving the "Silk Road" trading routes. He said he agreed with the idea, claiming the policy would benefit Thailand economically.

"They proposed that Thailand and China should join hands in reviving the Silk Road since it will help link our two countries. We will discuss the next steps for that later on, but the immediate plan is our agreement on dual-track railways," Gen Prayut told reporters.

Gen Prayut also emphasised the importance of bilateral ties in the region and strengthening economic cooperation through existing and yet-to-be developed frameworks.

Shortly after the end of the Apec Summit, Gen Prayut and his delegation left China for Myanmar to attend the Asean Summit and related meetings today and tomorrow. The summit will be attended by 10 Asean leaders and their counterparts as part of the East Asia Summit framework.

Gen Prayut plans to propose an initiative to promote border trade and economic connectivity among Asean members as well as dialogue partners, including the US, China and Japan.

Asean leaders are also expected to discuss detailed plans for the transition to the Asean Economic Community, as well as how to improve wider regional cooperation.

Other issues, including terrorism and extremist movements, the South China Sea and the Ebola outbreak will be on the agenda of the summit joined by 18 leaders, including US President Barack Obama, Chinese Premier Li and Japanese Prime Minister Shinzo Abe.

Graphic below shows the government's plans, inherited from the Yingluck Shinawatra administration, to upgrade key railway lines from single- to double-tracking. 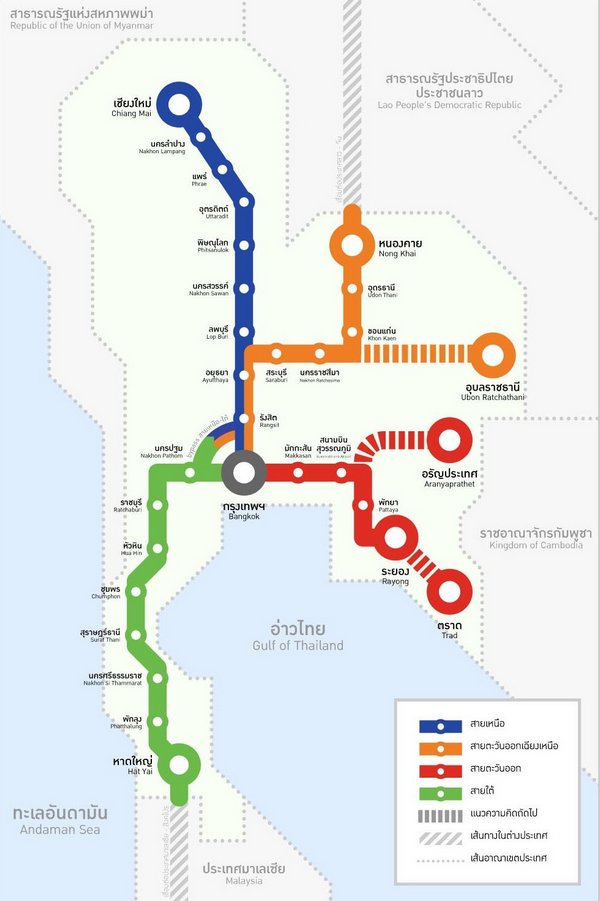