Book by Scottish journalist deemed to be 'anti-monarchy'

National police chief Pol Gen Somyot Poompanmuang has banned the ordering and importation of the book A Kingdom in Crisis: Thailand's Struggle for Democracy in the Twenty-First Century, having decided that it contains anti-monarchist sentiments. 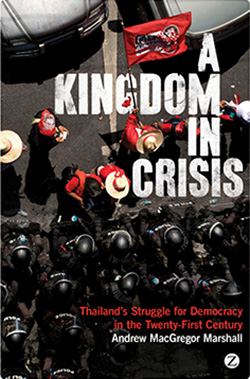 A Kingdom in Crisis: The book ''Thailand's Struggle for Democracy in the Twenty-First Century" is banned in Thailand.

The police chief issued the ban on Tuesday under the Printing Act of 2007. The book was written by Scottish journalist Andrew MacGregor Marshall, a former journalist with the Thomson Reuters news agency.

The book, which had not gone on sale in Thailand, was released last week by the British publishing house, Zed Books.

The police said the two articles showed that the book insulted and fomented hatred of Their Majesties the King and the Queen, the heir to the throne or a regent, and affected national security, peace and public morality.

In the order, Pol Gen Somyot said violators of the ban were liable to a prison term of up to three years and/or a fine of up to 60,000 baht. He also ordered the seizure and destruction of copies of the book. The order was published in the Royal Gazette on Wednesday.

The book is not the first to be banned after being deemed critical of the royals. In 2006, an unauthorised biography of His Majesty, The King Never Smiles by Paul Handley, was banned.

Mr Marshall was not immediately available for comment. But in an earlier post on Twitter he said: "Many thanks to the Royal Thai Police for banning my new @ZedBooks publication 'A Kingdom in Crisis'. Great for publicity!"