The pilot of police helicopter that crashed in Kanchanaburi province Thursday is blaming fierce winds for the Sangkhla Buri district accident that injured three people. 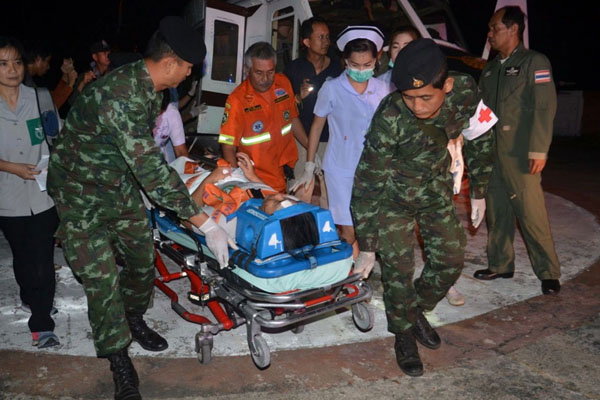 An injured passenger is moved to a hospital after the crash-landing. (Photo by Piyarach Chongcharoen)

Pol Col Charan Theprongthong, one of the two pilots on the border-patrol copter, said late yesterday that the craft with 13 people on board had been flying about 20 metres in the air for just six minutes when it suddenly developed trouble and crashed-landed. On-board the aircraft were members of the Princess Mother's Medical Volunteers team, technicians and the two pilots.

He said he tried in vain to land on the runway, but failed. He then steered it to a large bamboo forest nearby for the sake of safety of all the people on board.

Before the crash, everything seemed normal, he said. However, there were unexpectedly powerful winds blowing from Myanmar that caused the aircraft to crash, said the pilot.

The helicopter was damaged and three people were injured while the others  escaped unhurt.  Of the injured, nurse Wanpen Salee and engine technician Pol Snr Sgt Maj Jul Khunsuk sustained head wounds. Doctors said, however, they were out of any danger. Mr Pornpitsanu Tharawanarak, a public health official, was slightly injured. They were being treated at Sangkhla Buri Hospital.

The helicopter from the 134th BPP Unit had flown a team of PMMV staff to Ban Laipa in tambon Lai Wo of Sangkhla Buri district to provide medical treatment to villagers. The team comprised doctors and nurses from Sangkhla Buri Hospital. 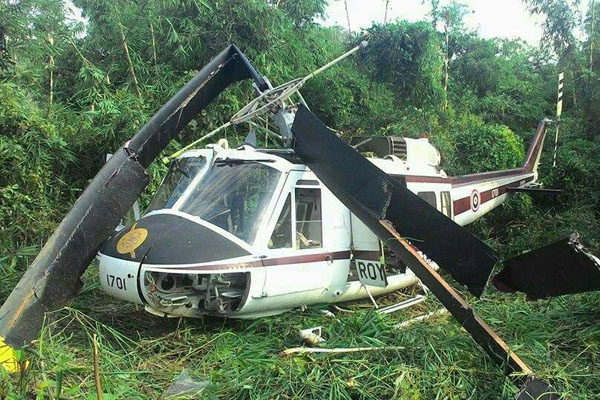 The helicopter becomes wreck after its crash-land in Kanchanaburi on Thursday. (Photo by Piyarach Chongcharoen)