Bangkok police are attempting to trace the body parts of an infant discovered in three DHL parcels purportedly being sent to the United States on Saturday by a foreign national. 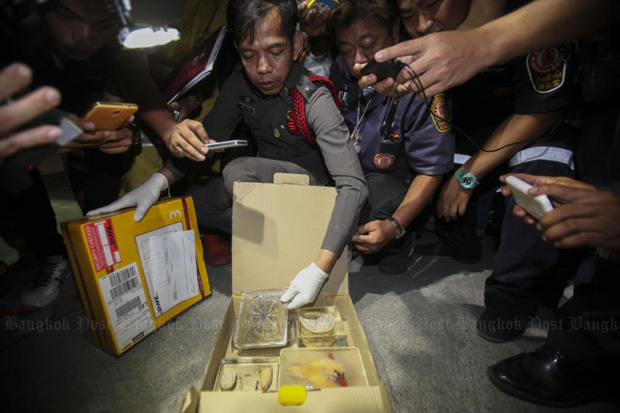 The first parcel contained the partial head and face of an infant. The second parcel had an infant's right foot cut horizontally into three pieces and the third carried two pieces of human skin with Thai magic tattoos known for danger protection along with a human heart. The parcels were destined for three locations in the US and police identified one of the senders as a foreign man whose address was in Pathum Thani province. His  name was not released.

DHL staff member Anirut Ninla, 43, said the parcels were picked up from the DHL outlet at MBK shopping mall with items inside being declared as “toys”. He decided to open them and alerted the police after an x-ray inspection found irregularities.

Investigators summoned two foreign men whom they said were the senders of the parcels and questioned them for three hours late Saturday night.

The men said they had bought the infant head and other organs from a night market at Saphan Phut (Memorial Bridge) in Thon Buri district but could not remember the directions to the shop, said Metropolitan Police Division 5 deputy commander Chumpol Pumpuang.

The pair said they felt the products were bizarre and wanted to send them to their friends in the US to tease them. Police initially did not find anything suspicions about them and both had cooperated, Pol Col Chumpol said. They were released at 2am on Sunday without being charged.

One of the men allegedly said he bought the flesh for thousands of baht from a vendor at a market in the Thonburi area. The man gave his fingerprints and was released, police said.

Police believe the baby organs may have been stolen from a medical or academic institute which had them for study purposes. The way the flesh was cut and preserved showed it was carried out by experts.

Police were checking with hospitals to see if preserved human organs had been stolen and were also trying to locate the shop that sold the baby body parts to the foreigners, Pol Col Chumpol added.

The human parts were sent to the institute of forensic science at King Chulalongkorn Memorial Hospital. Dr Kornkiat Wongpaisarnsin who inspected them said the organs had been kept in formalin for years and it would be difficult to carry out DNA tests to identify who was involved. A panel would be formed to work on the DNA-based identification, he said.